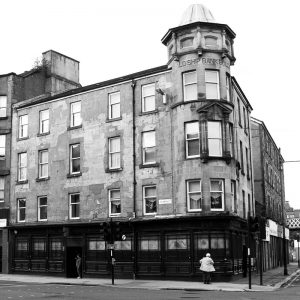 In 2006 the city of Glasgow was named by Conde Nast Traveller magazine as the UK’s favourite tourist destination, beating London and Edinburgh to the punch. Another promotional stunt disguised as fact? As a native I find these accolades dubious perhaps because I’m conditioned to the negative reckoning of my home city: violence, substance abuse, impenetrable argot. I’m writing this on the week Glasgow played host to the MOBO Awards, the first outside of London, several of whose nominees are known to actively promote violence, substance abuse and… insert punchline here.

I found this quote –

Think of Florence, Paris, London, New York. Nobody visiting them for the first time is a stranger, because he’s already visited them in paintings, novels, history books and films. But if a city hasn’t been used by an artist not even the inhabitants live there imaginatively.

Gray’s condescending proposition is obvious and troubling. Obvious because the city uppermost in his mind – Glasgow – is not Florence, Paris, London or New York. Neither is it Rome, Marseilles, Bath or Chicago. It’s Glasgow. It doesn’t need to be anywhere else.

On my travels I’ve observed the seamier side to be found in all cities: a junkie shooting up in a passage behind the Basilica di Santa Maria del Fiore or a wretched homeless man huddled on a bench in sub-zero temperatures in Manhattan. In London, where I lived for several years, the incidence of violence and poverty – hands down – beats Glasgow every time. What troubles me about Gray’s statement is the word ‘if’, freighted with the suggestion that Glasgow fails in terms of artistic representation. Yet the city features in countless paintings, writings and films. It’s just that most of our local artists and writers lack mass appeal and good PR and are overlooked constantly by a Londoncentric media. 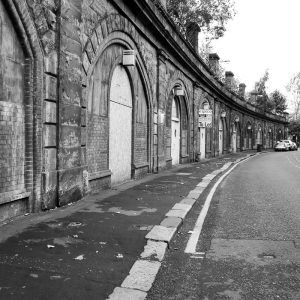 Unlike other provincial cities, the problem with elevating Glasgow to iconic status is that the city starts from a base of a peculiar psychosis nurtured by both the national media and its indigenous commentators. Glasgow’s inhabitants, not exactly clinging to the No Mean City myth, are all too aware that you can’t polish a turd. In some quarters one can still detect the mindset that says a bad reputation is better than no reputation at all. 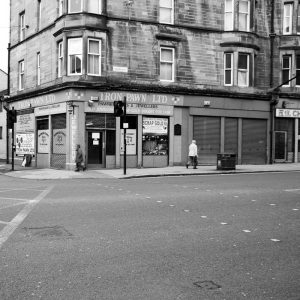 Short of a mass blowdown or a bombing, nothing can alter the reality of Glasgow’s chronic dereliction, including many of its recent constructions. But nothing should. A walk in the Trongate or Saltmarket confirms to the observer the endurance of both the ghost places of the past and its people. The recent closure of the legendary Paddy’s Market and the parachuting-in of shopfront galleries and faceless gov-subbed arts initiatives may look like gentrification, but it’s not. The culture cart can’t be put before the quotidian horse: poverty, unemployment, crime, poor housing, a lack of aspirations, job insecurity, bad health, low life expectancy all have a greater claim on public resources.

On the Saltmarket, citizens carry on smoking outside the Empire Bar and The Old Ship Bank. They buy broiler hens and dyed haddock at the Fish Plaice. They pan for gold at the Tron Pawn and eat pie suppers at the Central Café. They do this in blithe ignorance of what passes for cutting edge contemporary art displayed behind locked doors and blacked-out windows round the corner. 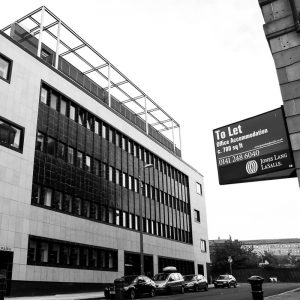 This much I know. The other day I was in the neighbourhood, shooting pickups and witnessing: the funeral party outside the Empire gathered to respect a member of a dying breed, the ambulance at the wasteground car park; the shell-suited guy with a scarred and booze-melted face in Osborne Street, fag behind the ear, a police constable clutching his arm. At the High Court, privatised trucks dispatch the accused. A Big Issue seller eyes up my camera and asks how much I’m willing to pay to use his likeness. All in the space of ten, fifteen minutes. I’d sooner have these two worlds collide than see my city turn into Primrose Hill.

Watching the recent crop of BBC4 programmes on Scotland I balk at the revisionist history of late twentieth century Glasgow. To believe their account is to fall for the lie that when ex-Lord Provost, Michael Kelly’s PR company came up with the Glasgow’s Miles Better campaign in the 1980s, somehow the dirt fell off its buildings and every citizen found gainful employment. Sanitised by ambitious, overworked BBC assistant producers, Glasgow’s recent past – the Poll Tax marches, high unemployment, the chronic damp of Corporation housing and the non-profit violence described so eloquently by the late Cliff Hanley in his autobiography, Dancing in the Street – is denied prerogative on the truth. 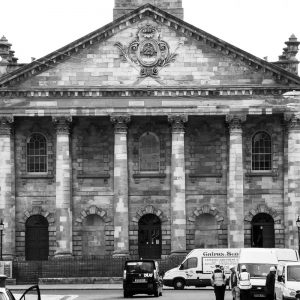 In the City Centre, West End and Southside, Glasgow’s Victorian architectural heritage is still evident, if marred by untrammelled road building, bad planning and signs of garish enterprises. In the great sandstone canyons of the City Centre the here-today-gone-tomorrow pound shops, drinking holes and vacant lots on Sauchiehall and Argyle Streets exist in the wake of Braehead, the Fort and Silverburn. On the corner of Sauchiehall and Hope Streets recently I noted a shop branded Chupa Chups – an entire store occupying a prime site devoted to confectionery; the cheap fix, an affordable and quick rush for these times. It’s redolent of Orwell’s account of 1930s Lancashire, a world sustained by tea and cakes and the hope of scooping the jackpot on the football pools.

Apart from the films of Bill Forsyth, Ken Loach and a handful of others, in cinematic terms Glasgow has not played itself on many occasions. Rather, only a few specific locations have been used as other, iconic places. The City Chambers as the Vatican. The city centre grid as a bygone New York. Moss Heights standing in for a Moscow suburb. John and Ingram Streets populated by Nazis. Toryglen as one of those non-specific urban enclaves favoured by London ad agencies. 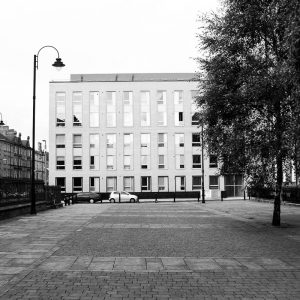 Part of the problem here is the scale of our indigenous cinema. Like our nation, our stories (and budgets) are small; most of the scenes are played out in interiors. Films set in Glasgow tend to be housebound, let off the leash only to go down the pub for a stabbing. But then it’s often these small, true stories that move us. If Glasgow is ever to forge a big screen identity, as opposed to a small-scale TV aesthetic, perhaps filmmakers and artists need to invent it.

I suspect this is wishful thinking. The work of the majority of artists and filmmakers based in the city makes little relevance or reference to it. The work tends towards the autobiographical and the demon-exorcising, their purview oblique, internal, oppressed. In the spirit of its beleaguered population and its physical manifestation, it seems Glasgow poses a conundrum too big and too bleak for most of us to contemplate, let alone express.

Reviewing the short video pieces for the Devil’s Plantation website, I’m struck by the diversity of locations. Granted, Harry Bell’s journey took him beyond the city boundary to outlying towns – Eaglesham, Paisley, Renfrew, Clydebank, Erskine, Inchinnan – each with its own history, each within easy walking distance of rolling countryside and the hills. By no stretch are these the rarefied and extreme wildernesses referred to in Robert MacFarlane’s The Wild Places but for any city-dweller they provide a kind of solace.

As for Alasdair Gray’s observation, his ‘if’ – I don’t believe artists have a monopoly on the life of the mind. Nor do they have the right to deplore on others’ behalf a seeming inability to live imaginatively. Lest we forget, it was not artists but engineers and scientists who invented the Glasgow we see today. The city may not have the cachet of a grand capital but often the best of us work with the least and sometimes to better effect.

The DP website is due to launch at the end of this month, so keep an eye out for it. My man reckons it’s the world’s greatest join-the-dots game ever…