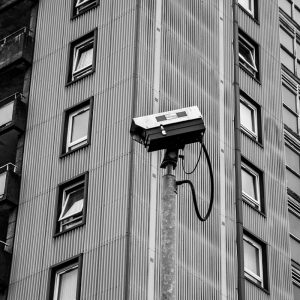 My trip to Castlemilk feels like visiting a distant relative: familiar, friendly but not something you choose to do often. Several of my relatives live – or used to live in the scheme, one of Glasgow’s four major peripheral post-WW2 sprawls designed for the fleeing slum-dwellers of the 1950s and 60s, built on the city’s greenbelt in response to a desperate need for housing. The word adequate comes to mind – if having a flush toilet in your house can be called adequate.

Beyond suburbia, the schemes bypassed the sandstone villas, semis, bungalows and ‘four in a block’ cottages closer to the city centre. These were the ‘bought’ houses, unobtainable to the majority of Glasgow’s citizens, more used to hiding from the rent man chapping the doors of privately-owned hovels than applying for mortgages. Somehow Rent Man, like Insurance Man and Provicheck-Woman always arrived at night, usually Friday night, the universal payday, when women redeemed their pledges in the pawn shop while their men escaped to the pub or the (then) illegal bookies. 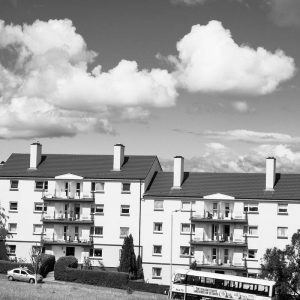 Castlemilk acquired its name from the Stuarts, who bought the lands known as Cassilton of Carmunnock in 1460 and whose Dumfriesshire estate and castle was close to the River Mylk. Before his death in 1938, the last Stuart Laird of Castlemilk sold the land to Glasgow Corporation, whose plans to develop housing were delayed until the mid-1950s, by which time the concept of top-down town planning as social engineering gained traction and was put into practice in the schemes.

It’s hard to grasp how only decades ago life was bereft of convenience. My first visit to a high-rise took place in Castlemilk, in a three-apartment flat on the 15th floor of Dougrie Place where, during the 1960s into the 70s, my Auntie Mary raised a clutch of cousins. Futuristic it may have seemed back then – with lifts, bathrooms, underfloor heating and stupendous views and at least there were roads and buses but how else could the labour force be transported to its daily grind with car ownership in single parts per hundred? 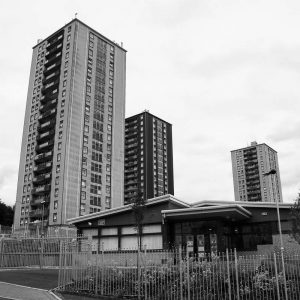 Asbestos-ridden schools, churches and chapels were built in haste but little else by way of community amenities was. Public houses were anathema thanks to Corporation and parliamentary moralisers who designated almost the entire southside of the city ‘dry’ – in a climate of extreme Calvinist dogma, underwritten by the likes of Teddy Taylor, the local Tory M.P. whose constituency, ensured by the ‘bought’ householders in Croftfoot and King’s Park, included Castlemilk and officially became Commander of the Gulag. Hard to believe now that one man stopped 50,000 from going down the pub.

Shops too were scarce in this pre-Tesco era – a local Co-op maybe, or a Galbraith’s or a Cooper’s Fine Fare. But unlike other schemes, Castlemilk, due to its high concentration of high-rises, escaped the concept of the retail van. In Pollok, vans did the business. Coal. Potatoes. Paraffin. Milk. Meat. I recall Dalziel’s Bakery – with its horse legend and motto – ‘a good roll does satisfy’. But Dalziel’s couldn’t begin to compare with the converted double-decker operating as a supermarket, patrolling the scheme, where the purveyor of bread and loose potatoes traded his goods for sexual favours and was eventually scandalised in the tabloids. By the 1980s, drugs were dealt from ice cream vans, resulting in the notorious ice cream wars, and culminating in the murder of six members of the Doyle family and their friends on April 16th 1984. 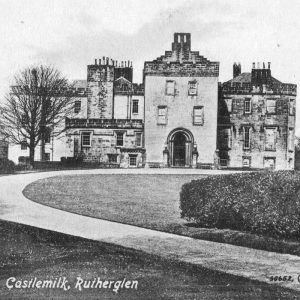 I’m heading to a place that no longer exists – Castlemilk House, built on the site of a thirteenth century castle, Cassilton Tower in the mid 15th century. Again – a recurring theme here – legend has it that Mary, Queen of Scots spent the night before the day of the Battle of Langside. Talk about sleeping around. But it seems Castlemilk was populated long before the Stuarts arrived. Bronze Age graves, an Iron Age dug-out boat and Celtic cairns have been unearthed in the area and evidence of a Pictish camp was discovered on the 13th green of Cathkin Braes Golf Club – another of Harry Bell’s prehistoric sites. But as with so many buildings of historical note, Castlemilk House was demolished by Glasgow Corporation in 1969. Not that I was aware of its existence when visiting my grandparents’ first-floor flat on Ardencraig Road. 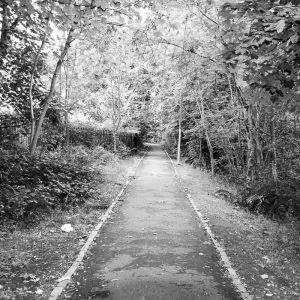 My abiding memory of Castlemilk is – an understatement – not pleasant. In the mid-1960s, at the age of five, maybe six, while playing in the woods opposite Ardencraig Road I was approached by a large, stocky, dark curly-headed man wearing a light coloured coat. After some benign small talk about whether or not I thought I was a good girl and did I ever pray, bizarrely the man encouraged me to sing, of all things, Jesus Loves Me. But as I sang, my feelings of confusion gave way to a terrible dread and the knowledge that something unspeakable was about to happen.

To this day it’s an episode so vivid I play and replay it, propelling myself back to the past towards the worst possible conclusion. Fortunately, trusting my instinct I ran. Years later, reading Gordon Burns’ Happy Like Murderers, a chill ran through me on learning that in the mid-60s Fred West worked as an ice cream van vendor on the southside of Glasgow. He even lived in the same street as my great-grandmother. Coincidence? Sadly I’ll never know, just as the terror I experienced on that overcast Sunday afternoon will never be erased. I never told anyone what had happened because thankfully nothing did. 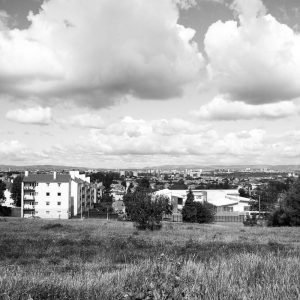 The weather’s glorious – great pillows of cumulus and sunshine. I make the trip from my house to Castlemilk Drive, stopping at Machrie Road. Of course, with Castlemilk House long gone all that remains is a grassy gap site and judging by the number of new-builds, the area is ripe for redevelopment. More impressive is the view stretching for miles northwards across the city and the distant hills. I have no idea whether Harry Bell ever visited this site or if he merely relied on his maps and ruler to create this branch line – not even a true leyline – since it’s the only site on this one alignment plotted to the Necropolis. 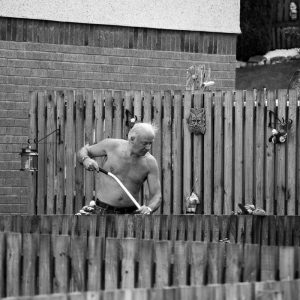 As I set up my shots a few passers-by ask what I’m up to. Not for the first time it’s assumed I’ve something to do with housing development. One cheery woman, laden with plastic shopping bags, stops to enquire. When I explain – or try to – she tells me how her kids took part in a photography project funded by the charity Comic Relief and how much they enjoyed themselves. I watch a man, evidently taking pride in his patch of garden. However this portrait of peace and normality belies the fact there are more CCTV cameras in Castlemilk than I’ve seen in any other scheme having counted at least 30 on a small patch around Castlemilk Drive and Dougrie Road alone and leading me to wonder – how much crime is committed here, or do these cameras act as a deterrent? I don’t doubt bad things happen to unlucky people, but all the same I’m shocked at the level of surveillance. 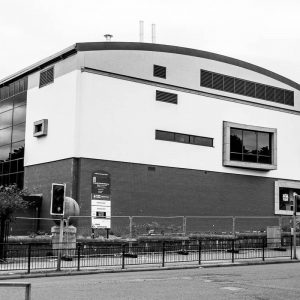 Walking around I get the feeling that Castlemilk is floated not on charity, Lottery funding notwithstanding, but on the regenerative power of the public purse, the new giro money chucked at the poor. It’s clear the area has seen a lot of investment lately. New housing, built at a low-level and with gardens, has gone up in recent times. The local pool’s been refurbished. There are more shops, more amenities it seems, but probably not enough. The poverty’s still tangible but at least there’s life on the streets. People collect at bus stops, the Braes shopping centre and the library, going about their business. 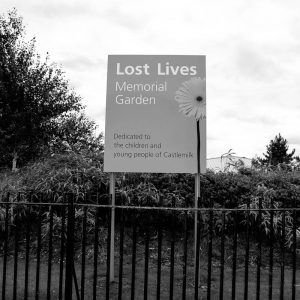 As for crime – who knows whether more murders are committed in quiet, affluent suburbs than in the schemes? I note the sign for the Lost Lives Memorial Garden, created in memory of dead children and ‘young people’. Can it be that bad? Are we talking murder here or self-annilhilation? I cite the fiction perpetrated by the media during the recent Moira Jones murder investigation. Had the victim been a drug addict or prostitute as first mooted then clearly the area she lived in must have abetted her violent end. When it emerged that she was a respectable working woman, Moira Jones was said to have lived in an affluent suburb, an area possessed of solid Victorian apartments overlooking a beautiful park.

In the end though nothing is ever wholly true, given the immeasurable gap between what gets reported and what most of us are prepared to believe. At a time when the national media is focussed on stories about youth crime and untimely deaths, Glasgow’s murder rate, for all but the most high-profile cases, continues to go unremarked.

Leave a Reply to Sharon Mulligan