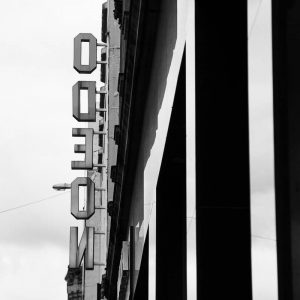 Once upon a time – fifty years or so ago – I went to the movies for the first time. The cinema, a converted cork factory known as the Korky (aka The Ardgowan) was situated on Weir Street, Tradeston. Closed in 1963, it was demolished in 1965. Enchanted by this early experience, ever since I’ve conflated cinema with memory and reality and myth – and the bizarre idea it was somehow connected to me. The film I saw that day was the Marx Brothers’ Duck Soup (1933) deemed a flop during its first run at the height of the Great Depression.

How an American movie made in the 1930s arrived at a Glasgow picture hall three decades later is lost knowledge but the message of Duck Soup – not least its prescient take on European sabre-rattling – resonated with its Glasgow slum-dwelling audience, whose lives on a good day mirrored the anarchic slapstick played out on screen: loud, fast-lipped extras in an overcrowded monochrome set, politically tuned to the key of socialism but repressed (in script jargon) by external reversals borne of internal weaknesses. The rest is history one might say, if only history didn’t have the nasty habit of repeating itself. Riots? This city wrote the book on it – and a worthy subject for a future blog. 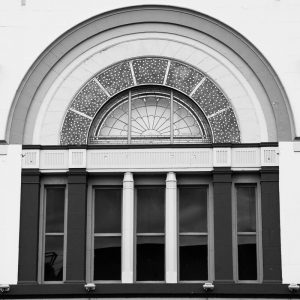 Glasgow, a great filmgoing city, once hosted no less than 180 cinemas and where even a backstreet dive such as the Korky could accommodate an audience of almost 1200. The running joke was only the rats got a free pass. Somehow in my fevered – no doubt false – recollection, the Korky was a flea-bitten salon with wooden benches and a white sheet on a wall passing as a silver screen, a place where two jeely jaurs could secure entry as seen in Bill Douglas’ My Ain Folk (1973). Sadly no photograph of the Korky exists, but an elevation of its facade can be seen on the excellent Scotland’s Cinemas website. 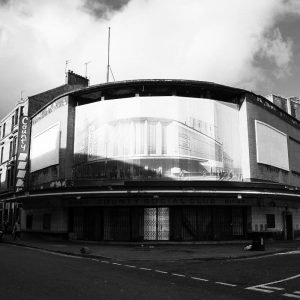 My interest in Glasgow’s picture halls was rekindled recently when invited by Sunny Govan Community Radio to contribute a series of shows. Like the rats of the Korky, I had a free pass so my suggestion of music, movies and memories was welcomed. As it happens, a spit away from Sunny G’s Govan Road HQ stands one of my favourite old haunts and a good example of a purpose-built cinema, The Lyceum, built in 1938 on the site of the old Lyceum Music Hall which, in the fine tradition of so many of the city’s venues caught fire. Its replacement, a sleek Moderne construction of faience tiling and glass brick, was less a temple to the seventh art than a statement of optimism in a place where it was and is most needed. 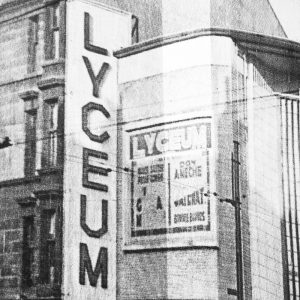 An alien spacecraft of a building, today The Lyceum still rubs along with its late Victorian and Edwardian red sandstone tenement neighbours. Long vacant, its function as a cinema ceased decades ago and suffered the same fate as so many old picture halls when it became the County Social Club, a bingo hall. My one abiding memory was watching – of all things – an Andy Warhol double bill – Flesh for Frankenstein (1973) and Blood for Dracula (1974) – the kind of adventurous programming that most arthouse cinemas can only dream of today.

Significantly, 1938 was also the year John Brown Shipbuilders launched the Queen Elizabeth on the Clyde and when Glasgow staged the Empire Exhibition. 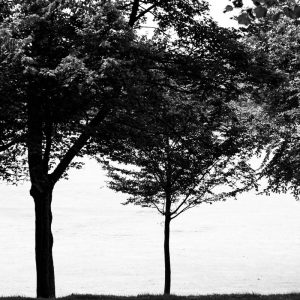 The last great expo before WW2, the Glasgow Empire Exhibition was the city’s final showcase as an industrial powerhouse and imperial servicing department. Staged in Bellahouston Park, a suburban greenspace bordering the Ibrox, Mosspark and Pollokshields areas of Southside Glasgow, it was the UK’s second Empire Expo after the 1924 Wembley Exhibition.

Principal among the VIPs attending the Empire Exhibition was George VI, subject of the film, The King’s Speech, (2010) starring Colin Firth. Recently I chanced on a Pathe newsreel of the Expo’s opening ceremony and found it oddly moving, less because of Bertie’s evident stammer than the respectful silence of the tens of thousands attending, mainly Glaswegians, an audience to this day cited in countless TV documentaries as the most hostile in the annals of British theatre. Yet in this most theatrical of arenas, as the King made his address, the hush of the crowd lends pathos, a crowd who only two decades earlier had witnessed a previous Majesty’s armed forces deployed against them in George Square. That the film, poorly edited, was never publicly screened speaks to the Establishment’s – and possibly the Monarchy’s – unease over his performance. 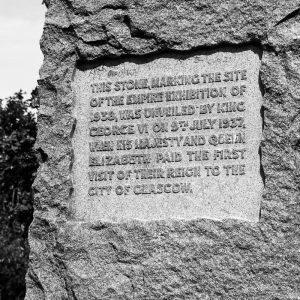 A second clip – also unused – features uncut rushes of the Exhibition site but fails to identify the precise event or its location, stating that it is a ‘fairground’ somewhere in ‘Scotland’, a lack of knowledge (or curiosity) that gives London film archivists a bad name.

The most authoritative account of the Expo, The Empire Exhibition of 1938: The Last Durbar, (1988) was written by the late Bob Crampsey, the respected teacher, sports broadcaster and polymath whose meticulous research and delightful reminiscence deserved more than the markdown price I paid in Bargain Books. Crampsey’s book is not mere record of the event, but a portrait of a proud, provincial city emerging from WW1 and inter-war years of depression to a state of optimism, hope even, for a better future. 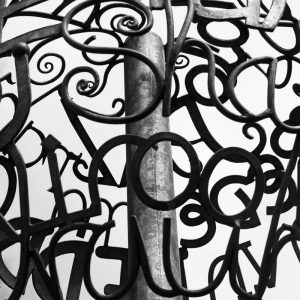 One of a long line of civic morale boosters, the Exhibition was conceived of as part industrial shopfront and part theme park, simultaneously displaying an invented past in concert with an invented future. As in any theme park, the Pavilions of Bellahouston were both real and unreal in the sense that a film set, however concrete, only serves illusion. Bucolic confections such as An Clachan and The Highland Castle, built as shortbread tin crowd-pleasers, recalled the Victorian reinvention of Scotland that predated Hollywood’s take on the nation in Brigadoon (1954). 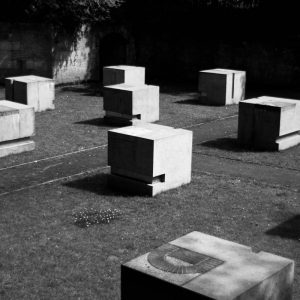 Viewed from a 21st century perspective, the audacious modernity of the planning, scale and construction of the site defies its latter day equivalents. Audiences gripped by Fritz Lang’s Metropolis (1927) or the Art Deco scenic design of Hollywood movies such as Grand Hotel (1932) believed that one day Glasgow could look like this. Built on the shortest of timelines, for the briefest moment, a small corner of the city fulfilled that dream. Surviving photographs reveal the craft and effort expended, demonstrating that the trades involved could rise to more than the motive of a paypacket – in this case, the pride and ambition required to outdo London, which as now, went largely unremarked in the national media. 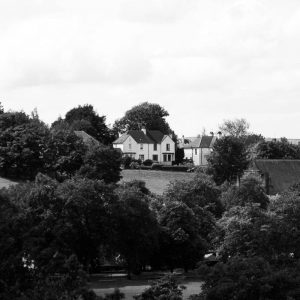 Where today can one glimpse what the future might or should have looked like? Yet only three years before the Expo laid its foundations, a spit away from Bellahouston, the City of Glasgow Corporation’s development of social housing, built on the greenbelt site of Mosspark was as removed from the Bauhaus as it gets. In neighbouring Pollok during the 60s-70s, the common hope was that a Mosspark tenant would die, so desirable were these twee cottagey, pitched roofed, four-in-a-block and semis, with their front and back patches of gardens and their ‘bought house’ facades.

Crampsey notes that the summer of 1938 did not favour Glasgow. Heavy rainfall and high winds marred the Pavilions of Bellahouston Park but fortunately the Exhibition boasted its own cinema, only a few hundred yards from another, local cinema – The Mosspark Picture House, hidden in a side street, where as a family we watched the bibical epic The Red Sea (1956) and Disney’s classic The Jungle Book (1967). 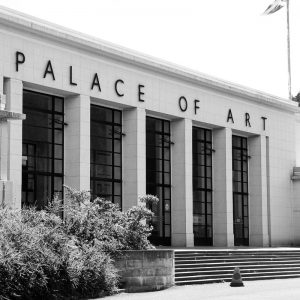 At Bellahouston, little of the Exhibition remains. The park’s personality is split between art and sport, as evidenced by the Palace of Art, now devoted to the Sports for Excellence Centre. Behind its stern and dignified pale grey facade, I once ‘danced’ in the title role of Stravinsky’s Firebird in an extracurricular school show, cast less for my balletic chops than my long and unruly red hair. Like many Glasgow landmarks doubling for elsewhere, the Palace of Art also stood in for some Soviet monolith in a BBC drama. 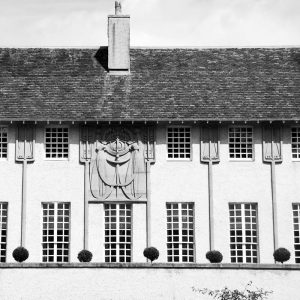 The park’s recent construction, The House for an Art Lover is based on an original Charles Rennie Mackintosh 1901 scheme for a German design competition and was built between 1989 and 2006 – a timescale hardly competing with the construction of the 1938 Exhibition. To the casual observer Mackintosh’s design remains attractive, so it’s sad that in order to survive it flogs itself as an upmarket wedding venue, cafe and gift shop. In direct competition, less than a mile away is Pollok House, managed by the National Trust for Scotland and, judging by the exterior rusting ironwork and leaking roof – only months ago I witnessed antique, leather-bound books ‘left to dry out’ in a public area – the current keepers are not quite managing. 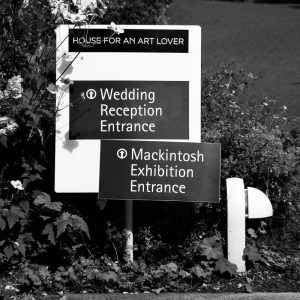 The most visible and iconic symbol of 1938 was the Tait Tower – the Tower of Empire, a 300 foot erect slice of modernity that shortly after the event was deemed an obvious target for Nazi bombers and subsequently razed. The war may have been won but over a half century later, when the Glasgow Science Centre built a tower in hommage to Tait, its 360 degree rotation gearing frequently broke down, suggesting that whatever engineering prowess Glasgow once possessed, like the new tower’s neighbouring bridge, is flawed, perhaps irreperably broken. Fitting then that these days the Science Centre Tower is referred to by Govanites as the Junkie’s Needle. 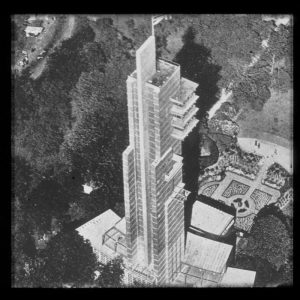 With this in mind, my last trip to Bellahouston Park was not one I thought I would have to make. In the company of my sister, one bright and breezy day we ventured to the park on a clandestine mission, one of sadness tempered by the humour of our ineptitude. How exactly do you scatter the ashes of your kid brother? A brother who died too young in the most tragic and messy of circumstances in another continent. To cite suicide would be wrong but close enough to the mark, suffice to say drugs – not nice drugs – were a component of his death.

Had he lived in another age, it’s likely that my brother, like my father, would have become an engineer, one of a number of skilled tradesmen who built the ships, factories and power stations that kept everyone else employed. But he wasn’t. Born in 1970, my brother aspired to another, different life that led him to Art School where after five years he pursued a career as a commercial photographer and hoped eventually to become a filmmaker. The reasons he didn’t are the same age-old reasons why anyone who lives long enough may conclude their dream is beyond their reach. Unlike most of us, sadly my brother didn’t live long enough to reconcile himself to what is unobtainable in the short span left to us when the dreams – and the drugs – wear off. 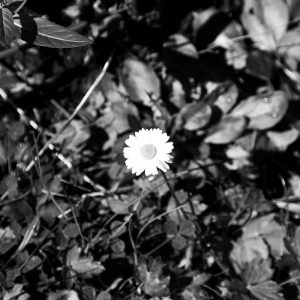 This last photograph is where our brother lies – literally pushing up daisies, an image I’m sure he’d appreciate. At the very least what my sister and I did that day was to put our brother to rest on the site of Tait’s Tower, that ghost building of a future beyond reach. Remains on remains as invisible as Harry Bell’s ancient tracks.

Apologies to my subscribers who got an email alert for this blog entry. I accidently put it up without the accompanying photos. Thanks for your understanding.