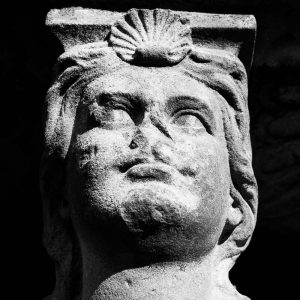 The City of Glasgow has a film charter and apparently I’m in breach of it by not notifying the Film Office or providing them with a script. Not that I have one. And since I have no crew, actors, car chases and pyrotechnics either, I hardly qualify as a legitimate production – just a shambling, slightly lunatic presence loose on the streets. I can’t afford to declare myself. To shoot here, according to the council’s rate card, it costs – bizarrely – £736 for a commercial or TV four-hour shoot, £220 for the same duration if it’s a documentary you’re making and, big of them I’m sure, no charge if the film is for educational purposes. But what does it cost, I wonder, if it’s art? 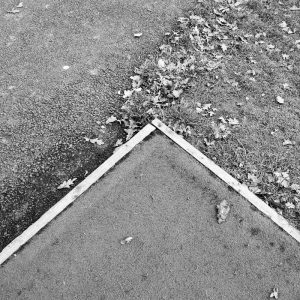 One day the result of my efforts may well claim the status of art, but what if I added a few commercial elements – a celebrity narrator, say, or archive film footage, licensed music, or famous stills? These days artistic achievement and aesthetic stock (not to mention cash) can be obtained through a piece of legal trickery known as ‘fair use’ – e.g. – co-opting a famous film and sticking it in some gallery with a thesis on time. I’ll take my chances on originality and no doubt, obscurity because when it comes to shaking down arts funders and dazzling gallery owners, I’m a rank amateur.

My next trip is to King’s Park in – of all places – King’s Park, described in a scant Wikipedia entry as an affluent suburb south east of the city centre. Who the king is, I’d love to know, since I’ve drawn blanks in my research. Where’s Jack House when I need him? The area is about as desirable and as anonymous as it gets: row-upon-row of almost but not-quite identical bungalows and quaintly-named cottage semi-detached properties situated close to Castlemilk. My target today is King’s Park Mound, about which I know next to nothing. The park was always somewhere passed without note on the number 5 bus on the way to visit relatives in Castlemilk, usually on dreary Sunday afternoons. 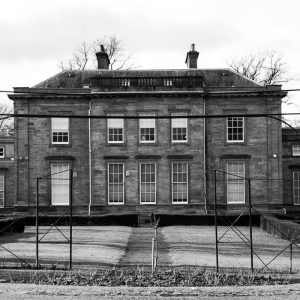 The best way into King’s Park is from the Carmunnock Road by way of a road leading to Aikenhead House, built in 1806 on the site of a 17th century mansion. Wings have been added over the years and today it forms 14 separate flats, similar to those at Camphill House in Queen’s Park. Today though, I hit a problem. A middle-aged blonde behind the wheel of a cut-price 4×4 is blocking the entrance, talking on her mobile. She waves me on furiously. Obviously someone used to getting her own way, I decide, waiting resolutely for her to make the first move. Clearly she’s not happy but I have no desire to trade paintwork. At this moment I experience a revelation – this woman is Glasgow, confirmed to me when she cuts her call, slides down her window and delivers a mouthful of abuse that undermines her otherwise respectable appearance. 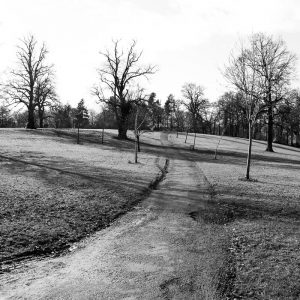 I park outside the grand house itself and scan the scenery. Not promising. The sun’s out today – the weather I’ve waited on for months, it seems. Last week this ground was under six inches of late winter snow. Before me are numerous lumps in the ground, the type of landscape revered by English nostaglics as ‘undulating’. Me, I’m suspicious, because if there’s an actual, specific mound to be found here, finding it is going to be a tough call. My thoughts stray to the Battle of Langside and musing on how the dead must have been buried somewhere, I conclude King’s Park is as good a site as it gets. 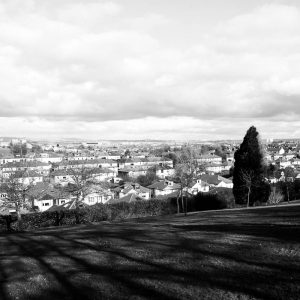 Walking round the perimeter heading due north I catch the view. It’s impressive, sure, but not on a par with Cathkin Braes or Castlemilk. I think of Harry Bell and why he assumed a mound in this place was of any particular relevance anyway. The mound may well lie on a line of his, but increasingly I’m unconvinced, my psychic antannae failing to receive. 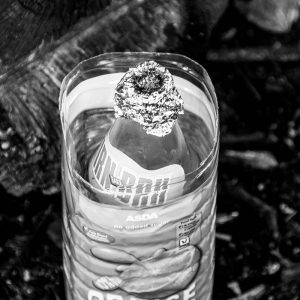 I’m practically on the verge of giving up when I decide to explore a mound in roughly the same place as plotted on the Glasgow Network of Aligned sites compiled by Graham Gardner. By my reckoning it’s the most prominent and promising of them all. Struggling in dank shrubbery I find recent human traces – mainly spent carry-outs and the detritus of Class B drugs. To be honest, I’m a little creeped out by the place. Suddenly my senses train on the shouts and squeals of schoolkids out on their lunch break, the cawing of winter crows and traffic ambience. For all Glasgow possesses its fair share of green open spaces, there’s no avoiding the grinding sound pollution. 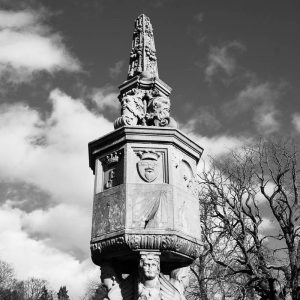 Moving on, I enter into more obvious landscaped territory; an ornate carved stone column with various insignia and sundials, a folly cobbled together from spare parts of ancient masonry. There’s a date – 1885 – and a Latin motto, an inscription common on old sundials – ‘Horas non numero nisi serenas‘, loosely translated as ‘I only count the happy hours’. Here I also find the initials ‘E. C. H.’ topped with what looks like a baronet’s crown. It may be the work of the overlooked local architect, David Hamilton, who altered Aikenhead House in 1806 and in 1823, but it’s only a guess, since I find no information on this or any other aspect of the park, not even on the city council website. 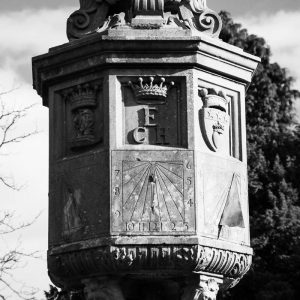 Then again, Glasgow has parks to spare, and King’s Park seems to have fallen off the list. For the last 130 or so years it seems the city’s parks have survived intact, due more to the protest power of its citizens than by council honchos, otherwise the Botanic Gardens would now be playing host to a nightclub, Kelvingrove would have its own pub and Pollok Country Park would have citizens paying exorbitant sums to swing from the trees in the North Wood pretending to be primates. 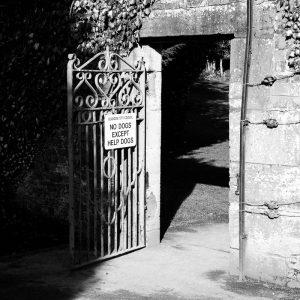 At the nearby walled garden apprentice Land Services staff or – possibly – young guys on community service – are being tutored in the art of hoeing. I spot a wooden arbour with what I think is a representation of St Mungo, the sunlight playing on freshly-dug beds and borders, doubtless a source of pride to the staff and heartening to those who visit. A young couple push a stroller, pausing now and then to take photographs. Yet all the while I feel I’m on a fool’s errand because I’m looking for a mound that may or may not exist, not even sure why I’m looking in the first place. To the south, obscured by trees, lies a tantalising panorama – the very edge of the world it seems.

Despite the lack of evidence of the mound, I enjoy the trip, the weather, watching people going about their business, but in the end I conclude – wrongly, who knows – that there’s nothing particularly special or indeed, magical, to be found in King’s Park, which either means a lot of knowledge has been lost, and thus its place in posterity, or there was nothing here worthy of a claim to begin with. Maybe it’s the spirit of privatisation I feel, exemplified by the brassy bint in her cheap 4×4 barring entrance, that is the villain of this particular plot. If so, it almost makes you want to break the law.

Later, I turn up a photograph. Turns out the mound I found was the right one after all. It just didn’t look like it.