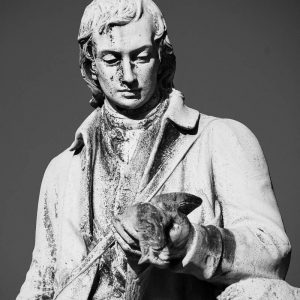 While growing up it seemed to me that Paisley was more enlightened than its bigger, brasher neighbour. That, and its proximity to Pollok made it my playground. As a kid, on Saturday mornings I’d catch the red bus from Paisley Road West to the East Lane Ice Rink. Less than a decade later, as an art student I’d pose at punk gigs in the town’s Bungalow Bar or go to movies such as Ken Russell’s The Devils, banned by Glasgow Corporation, whose heavy-handed censorship resulted in an exodus of the city’s cinemagoers. Glasgow’s loss was Paisley Odeon’s gain.

On this rare sunny evening I make the journey along Paisley Road West, passing the bungalows of Cardonald and Crookston with their four-figure street numbers, reminiscent of LA suburbs in the paling sunlight. Arriving, I get thrown off course by the town’s one-way system and, navigating my way to Abbey Close, I notice the street signs: Cotton Street, Gauze Street, Dyer’s Wynd, Silk Street – names preserving Paisley’s manufacturing past in textiles and thread. Here fortunes were woven. 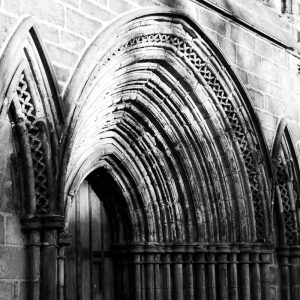 According to geomancer, Graham Gardner, in the GNAS alignments mapped on Google Earth, Paisley Abbey is the approximate location of another of Harry Bell’s site alignments, a sole site occupying a line of its own, linked to the Necropolis. Why Bell chose Paisley Abbey, I have no idea, apart from its reputation as an ancient place of worship. Founded in 1136, they don’t come more ancient than the Abbey. Judging by the signage it’s a tourist spot and as with any old pile, these days it’s requisite to ply one’s wares online – 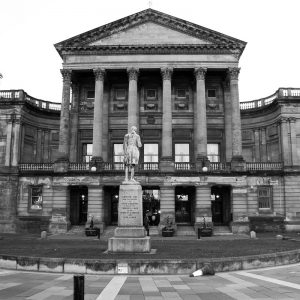 It’s Friday night and the Town Hall bell chimes the quarter hour. I watch groups of Scottish-Asians entering the hall for some kind of gathering, their fine clothing somehow befitting the industry on which Paisley was founded. The Abbey itself is splendid, built on a grander scale than Glasgow Cathedral, its Gauze Street facade bordered with an unkempt lawn in which several memorial stones are embedded, some dating from the eighteenth century. 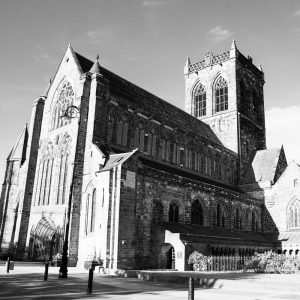 As I grab some stills, a trio of men passes, speaking Russian. At a nearby bus stop, two African couples are in animated conversation. I’ve no way of knowing but my guess is they’re recent immigrants. As they laugh and cajole, I wonder, how did they end up here? Had he been around today surely the bard of Paisley, Robert Tannahill, would have written about them. 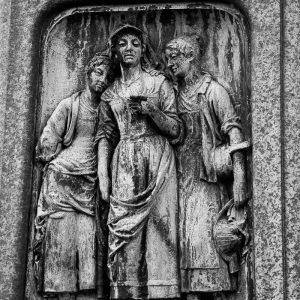 Tannahill ought to be better known. A close contemporary of Burns, and a prolific writer of poetry and song, his humanity, his empathy and his self-deprecation are woven into the works, as in this extract from The Resolve, from Poems and Songs: Chiefly in the Scottish Dialect (1815)

Twas on a sunny Sabbath-day,
When wark-worn bodies get their play,
I wander’d out, with serious look,
To read twa page on Nature’s book:
For lang I’ve thought, as little harm in
Hearing a lively out-field sermon,
Even tho’ rowted by a stirk,
As that aft bawl’d in crowded kirk,
By some proud, stern, polemic wight,
Wha cries, “My way alone is right !”
Wha lairs himself in controversy,
Then damns his neighbours without mercy,
As if the fewer that were spar’d,
These few would be the better ser’d.
Now to my tale — digression o’er —
I wander’d out by Stanley tow’r,
The lang grass on its tap did wave,
Like weeds upon a warrior’s grave,
Whilk seem’d to mock the bloody braggers,
And grow on theirs as rank’s on beggars—
But hold — I’m frae the point again—
I wander’d up Gleniffer glen,
There, leaning ‘gainst a mossy rock,
I, musing, eyed the passing brook,
That in its murmurs seem’d to say,
“Tis thus thy life glides fast away:
Observe the bubbles on my stream
Like them, Fame is an empty dream,
They blink a moment to the sun,
Then burst, and are for ever gone:
So Fame’s a bubble of the mind;
Possess’d, ’tis nought but empty wind,
No courtly gem e’er purchas’d dearer,
And ne’er can satisfy the wearer.” 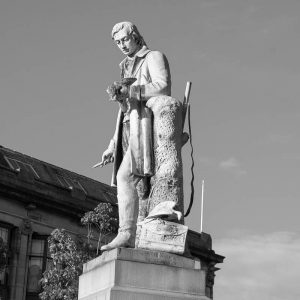 Noting the statues dotted round the vicinity, I catch myself pre-empting their merit with a metropolitan bias, expecting to be disappointed. How wrong can you be? On closer inspection Alexander Wilson’s is finely-wrought, the maker London-based, a Southwark firm. Obviously some generous benefactor had a hand in this since it’s as fine a portrait of a local hero as you could hope to find in any great city. Wilson himself of course was no provincial, having immigrated to the United States where as a noted poet, ornithologist and illustrator he furthered his already considerable reputation. His early work, Watty and Meg, when published anonymously, was assumed to be the work of Burns. In 1792 Wilson was jailed for 14 days for writing an allegedly libellous poem, The Shark, Or Lang Mills Detected. It would be hard to imagine a Scottish poet being banged up today, unless the charge was for crimes against writing. 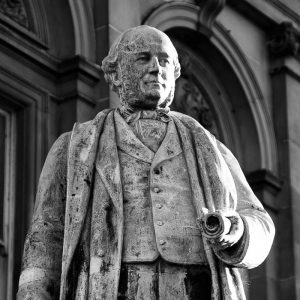 Next to the Town Hall I find the fine, upstanding George Aitken Clark. The Clark clan, having made their fortune in thread became major benefactors in Paisley. The story goes that when George’s brother, James, was collecting subscriptions from the general public for the purpose of erecting a hall, he learned his brother had died in America, bequeathing £20,000 for the cost of the building. To his credit James did the honourable thing. Returning the subscriptions in full, the Clark family met the total cost of the building, designed by Belfast architect, WH Lynn and opened in January 1882 when 12,000 townsfolk gathered in awe of the new electric lighting system.

With sunset arriving two minutes earlier each day, the light is fading fast. Circling the Abbey I make my way back to Glasgow. On the road out of town I pass the site of the old Ice Rink, which closed down in 1973. Today in its place stands a branch of Morrison’s supermarket. Hard to believe that in August 1965, Cassius Clay, then the world heavyweight boxing champion, held an exhibition match in East Lane in front of 5000 people. But then, as towns go, Paisley has always fought above its weight, refusing to be beaten by its big neighbour.