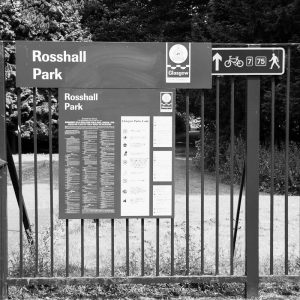 I try not to look at the man sitting in a mink-coloured Jaguar. Dark suit, tan, late middle-aged, he has the air of the self-made, too classy for a local politician. He looks like he’s talking to himself until I realise by his body language he’s talking on a hands-free mobile.

The sun beats down on the car park of Ross Hall Hospital, one of 60 such facilities operated by private healthcare provider, BMI. Already I feel I’m intruding but unlike the NHS the car park comes for free. Turning to the man in the Jag, I wonder – what’s he doing here? Is he anxious about his wife or some other relative or is he cutting some shady property deal? Whatever he’s doing, it’s none of my business.

My business – telling stories – brings me to this quiet south-western corner of the city, Crookston Road. From my point of view through the trees I can just make out the imposing Victorian tower of the former Leverndale Psychiatric Hospital. In neighbouring Pollok, every kid seemed affected by its looming presence and, in the absence of anything better to do, we invented demons. Playground tales of escaped lunatics ran rife. He – always a ‘he’ – had been seen in the woods backing onto the school, we told each other. ‘He’ was camped in the water tower. Rumour had it he had already snatched someone. We picked at this narrative scab for years on end until it left a deep mental scar. 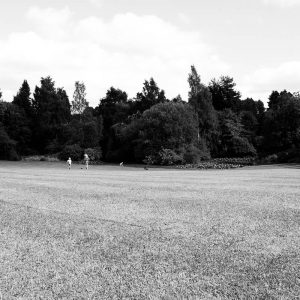 On a freezing January day in 2000, my brother and I broke into the ex-hospital to photograph its derelict interior. During the early 90s, when Leverndale closed under the Conservative government’s Care in the Community policy, the furnishings and effects were left virtually intact. There’s something chilling about these institutions. They crop up regularly in the lexicon of urban exploration, feeding some primal urge in us to make contact with the past, sampling histories that never belonged to us. Maybe in such places – with their broken windows, bed frames, exposed cables and damp, limp curtains – we find solace in the resonance of those who came before us, flexing our received knowledge of what it must have been like to be a patient here and the unnameable treatments they endured.

Amongst the debris – upturned chairs, stacks of grey cardboard bedpans and sad greetings cards – I found a red plastic folder labelled Visits After Discharge, containing page after page of case studies of ex-patients, supposedly settled in new accommodation. It was a deeply moving document in many ways, handwritten in blue biro. From the various hands of its authors I discern certain graphological traits, the giveaways of the nurses who cared and those who didn’t expressed in abstract arcaded forms, angles of inclination, pen pressure. 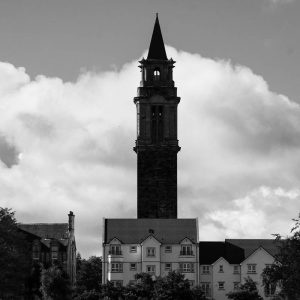 Small episodes were recorded, e.g. – George takes an interest in plants and waters them regularly, or Isobel went to the shops – speak of empty lives, small achievements and, between the lines, the poignancy of abandonment. Reading these terse reports, I sensed no aspiration or expectation that life would improve for these ex-patients, only a grinding day-in, day-out present, witnessed by overburdened, low-paid charges. Retrieving the folder, I took it home thinking, probably foolishly, that one day I’d get the chance to tell their stories but sadly the ending lacks the requisite feelgood outcome the money demands. As it turned out in 2006 parts of Leverndale were converted into housing by Miller Homes, the all-too-predictable fate of ex-psychiatric hospitals not just in this area but across the whole country.

Returning to Ross Hall park, I’m on the trail of another of Harry Bell’s PSAs. Trouble is, I don’t have much to go on. An online search offers little information. The park isn’t listed on the council website. The Crookston Road entrance can only be accessed from this private car park and is virtually invisible to the casual passer-by. However the park can also be reached from Pollok via a footbridge spanning the White Cart Water, the route I took when visiting Ross Hall as a kid, long before the private hospital was built. It always struck me as an oddity among Glasgow’s green spaces, easily overlooked, a secret place.

I get lucky. On the Historic Scotland website I find the following –

The Ross Hall designed landscape is exceptional in Scotland for the Pulhamite work. It occupies a site evident as a park in the 18th century, known in the 19th century as Rosshill, owned by the Earls of Glasgow. James Cowan purchased the estate and built the present Ross Hall in 1877 (now a hospital, listed separately, 221 Crookston Road). The landscaped park was acquired by Glasgow Corporation in 1948, and opened to the public in 1967. The Boat House is described as a cave on the current edition OS map. The Pulham dynasty had been in existence as landscape designers since the 18th century. Other known (or attributed) work to date by the firm in Scotland includes sites in the Kelvingrove Park, and at Ardross. They were responsible in England for commissions at Buckingham Palace, St James Park and Sandringham. Cowan was evidently both wealthy and well-connected, the works which he funded at Ross Hall being estimated at £20,000. Further listings at Ross Hall include the former gate lodge, 197 Crookston Road, with gatepiers and quadrants, the ornamental chimney stack, and the former stables, 161 Crookston Road.

They had me fooled. I always assumed the rocks were prehistoric. 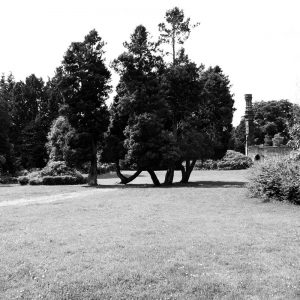 The Glasgow Network of Aligned Sites as laid out on Google Earth suggests a corner close to a pond, but with no obvious landmark, no Pulham stonework, no ancient building marking the precise spot. Hauling my camera kit I enter but soon lose my way. It’s been over 20 years since I was here and I’ve never entered by this gate. A shady path opens onto a wide grassy area fringed by mature deciduous woodland. There’s no-one around apart from a woman walking her dog and three kids playing. Not a promising start. I take a few shots for safety’s sake and move on, taking the riverpath which in July is profuse with wildflowers. Then, circling a green plastic-coated wire fence, I spot a recognisable landmark – the red sandstone of Ross Hall itself. Suddenly I’m oriented. 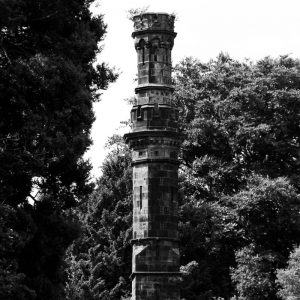 From here, everything reveals itself. I take shots of the stonework, the outbuildings, the graffiti, the plants, the grotto, but the exact site mentioned by Harry Bell eludes me. There’s no visible trace that distinguishes one part of this land over another. It’s hot now and I’m laden down and overdressed. Defeated, I collapse on the lawn by the pond and look up at the sky, my thoughts dark and mutinous, because if Harry Bell faked an alignment to suit his purposes, then where does that leave me? Was I only imagining a link from this place? Rechecking Google Earth and the GNAS, I discover Ross Hall appears as a singular spot, unconnected to any of Harry Bell’s leys. So why does it appear? And what possessed me to come here? 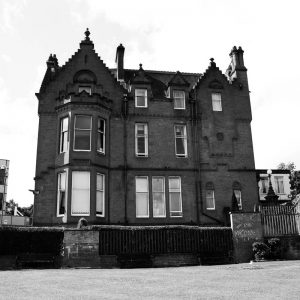 Then a bizarre thing occurs. I don’t see it, but it’s definitely audible – first, an animal’s cry, not a dog, but something larger and more alien and by the sound of it, wounded, a hellish sound. Seconds later, the sound’s reprised, only this time it’s not animal, it’s human, a prolonged and painful howling. Surely I’m not hallucinating? Could this be emanating from the private hospital? Or have I summoned the ghosts of Leverndale on the opposite side of the road? 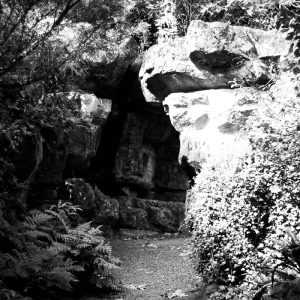 Later I find a paranormal website listing the following –

Lady with Grey Hair
Location: Glasgow – Rosshall hospital
Type: Haunting Manifestation
Date / Time: January 2008
Further Comments: A grey haired lady who died in theatre three many years ago is still said to haunt the area. Staff report a fleeting glance of her ghost before it vanishes.

They list no record of any hauntings in Leverndale. I find it hard to believe, but then, who’s left to tell?

Leave a Reply to Barry Mccann