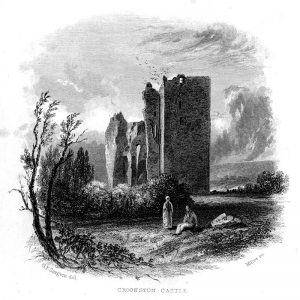 During a recent walk from Camphill Earthwork to the Necropolis with the esteemed Dr Ronnie Scott, we paused at the vast gapsite off Cathcart Road/Aikenhead Road to watch the foundations being laid for what’s known as the M74 completion. The road will plough through several communities in the city’s south east – Dalmarnock, Rutherglen, Polmadie and Govanhill – before joining the M8 at Kingston Bridge. Like its predecessor, the M77, the M74 extension is controversial. A public inquiry, started in 2003 and published in 2005, recommended against its construction, yet despite protests, the road is going ahead and is due for completion in 2011.

According to the archive of eco-action, when protests raged against the building of the M77 through Pollok Estate, situated only 50 metres from the road, in the housing scheme of Corkerhill, car ownership was recorded as the lowest in Europe. The archive also notes that one in five children in the Pollok and Corkerhill areas suffer from asthma. The M77 protests became one of the national news stories of the 1990s. But then, Pollok has always been a hotbed of civil unrest. The poll tax protests of the 1980s and the Pollok Free State of the 1990s may be distant memories now, but their histories endure. 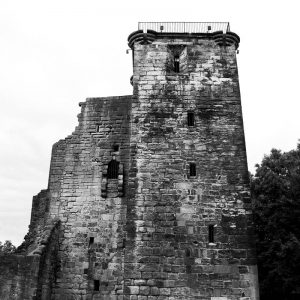 I travel back to my old stamping ground to revisit Crookston Castle, one of Harry Bell’s major PSAs (Prehistoric Site Alignments). The last time I visited, the monument was closed. Today it looks like Pollok is closed. It’s the school holidays but the streets here are eerily quiet, few cars, the only activity centred round the shops on Lyoncross Road and Ladymuir Crescent. All that’s missing from Linthaugh Road is the tumbleweed.

Today the weather’s dicey and undecided. There’s been a higher than average rainfall this summer with threats of flooding reported in nearby Paisley, surely not unconnected to the 53,000 vehicles a day travelling to and from the prosperous satellite towns along the M77. Me, I’m as guilty as everyone else, but with few buses and a limited train service, as a one-person camera crew sadly I’ve no other option. 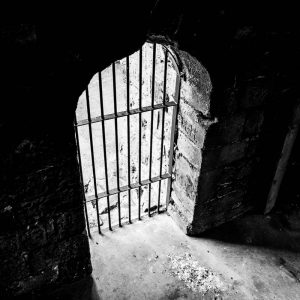 Thankfully this time my trip is not in vain. Unpacking my kit I pass through the gates and the keeper’s house to a chorus of barking dogs. In the neat, trim grounds a gang of kids aged from 4 to 14 are playing. It doesn’t take long for them to spot me. Seconds later the cry goes up – take our picture, go on! In this situation, my sense of purpose goes to the wall. I end up spending a couple of hours with the kids – lively, well-behaved and incredibly trusting – but a distraction all the same. They show me round the castle – after all, it’s their playground and they know every inch of its ramparts, stairwells and corners. 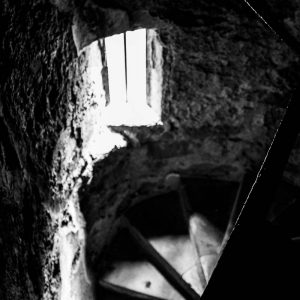 The older kids tell disturbing stories. Where I live, one youth tells me, there’s Polish guys who drop their trousers in front of you. The others chime – yeah, and they take our photographs. Ironic how these kids beg me to photograph them. As I’m escorted up a narrow spiral staircase, it dawns on me how vulnerable they are and how equally vulnerable I am. In my absence, an accident could happen at any minute and it would be no-one’s fault, but in my presence, as an adult, that same accident could implicate me, putting me in the jaws of liability, morally as well as legally.

Climbing to the top of the castle, I ask the only girl in the group if there’s any clubs or activities during the school break. She shrugs, noncommittal. I used to do a drama class, she says. She tells me how she would like to be an actress, then adds, squinting, well, that or an accountant. Why an actress? Because, she says, I think I’ve got the confidence for it. I believe her. What I perhaps should have asked her but don’t is – why an accountant? 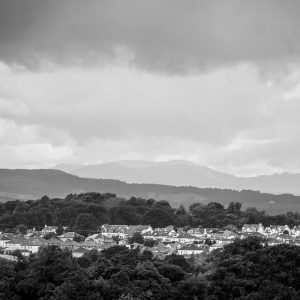 Three steep metal staircases later, we emerge from the dark into the light, the very top of the castle. The 360 degree view is breathtaking. But here I am with seven kids all clamouring for attention. I shoot the views from every point of the compass, reflecting on the fact that Crookston is the only castle left standing in Glasgow, even if it’s a heavily reconstructed one. They say location is everything and it was never truer than in the 12th century when Robert de Croe, or Croc, originally built it, aware of its strategic significance. 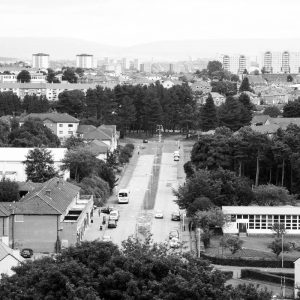 Crookston Castle was rebuilt by Sir John Maxwell in the late 19th century in a spirit of reverence for its past occupants, most notably Mary, Queen of Scots and her second husband, Henry Stuart, Lord Darnley. Accounts of Mary witnessing the Battle of Langside from the castle persist, but are mostly discredited on the grounds of distance. Legends are designed to last and the romantic myth of Crookston Castle, the doomed Mary and Lord Darnley, by all accounts a violent drunk – (what other city would name a district after a murdered latter-day ned?) – inspired numerous poets, including Robert Burns, Walter Scott, William Motherwell and Robert Tannahill, so the place has literary bones. The human kind were probably fed to the dogs. 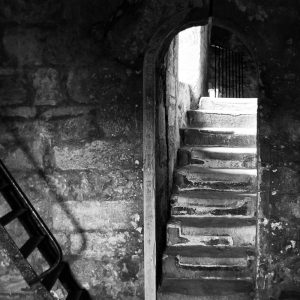 The kids circle restlessly, crowding my headspace. I need to escape but they insist I ‘interview’ each of them in turn. My young wannabe actress looks straight into the lens, clear-eyed, her demeanour assured. She’s so completely unfazed by the camera it’s compelling. She informs me that four primary schools in the area have closed. This is news to me. One of them, McGill Primary, is my old school. I make a mental note to pay a visit before it’s gone.

By now the novelty of the camera has worn off and the kids scatter, leaving me to take a few last shots. It’s late afternoon now and the clouds look threatening so I call it a day, regretting the fact I haven’t taken any stills. Watching the next generation run down the hill, I wonder what the future has in store for them. 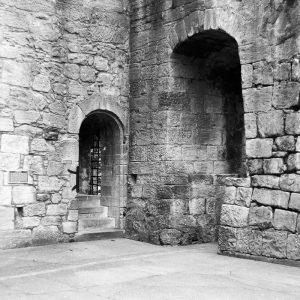 A week or so later I return. The light’s not great. I arrive at Crookston Castle early and meet an elderly couple from Lancashire, up on a family visit. With some justification they bemoan the lack of transport and things to do with the grandchildren during the holiday season. A recent Evening Times article confirms this, reporting how a third of the city’s leisure facilities are currently closed. 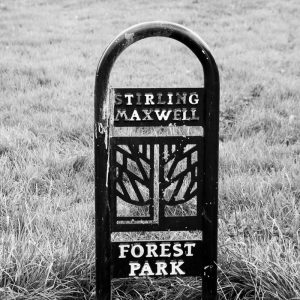 After bagging my stills I travel the short distance across the Levern to Lyoncross Road with its parade of down-at-heel shops. I’m about to turn a corner when a metal sign catches my eye – Stirling Maxwell Forest Park. Since when? To my knowledge the woods here never had a name when I was growing up here, so why the rebranding? Then, across the road, something else catches my eye – a shed bearing the name SWAMP, which I later learn stands for South West Arts and Music Project. 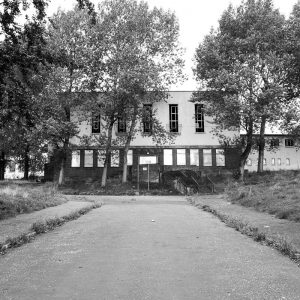 I make my way to Meiklerig Crescent where for the first time in many years I see my old school, McGill Primary. The gates are chained and padlocked and the building, more compact than I remember, is in a forlorn state, its lower windows blanked out with metal sheets, the grounds shabby and overgrown. For a moment I dwell on the vanishing landmarks of my childhood – virtually every house I ever lived in has been demolished or altered beyond recognition. Somehow I feel deprived of my past, that all I have left is the memory. 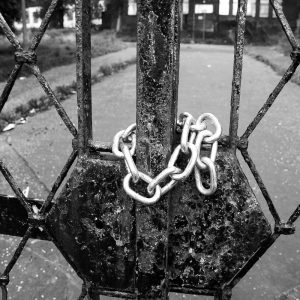 Three teenage girls approach and I soon learn that the school has become a refuge for junkies and neds, that the floors have been ripped out and the building’s already been on fire. Within moments I’m surrounded by kids again, all wanting to be in front of my camera. A gang of about 15 of them perform for me by climbing the gate, offering to take me into the school. I remark that it’s the first time that anybody wanted to go to school during the holidays. They volunteer that there’s nothing else to do round here. One of them, a boy of around 8 years old, asks me if I’d be willing to teach him how to act. It’s heartbreaking to have to dash his hopes.

Tempting as it is and curious as I am, I decline their offer to break into McGill. It’s one thing to be on the street with a camera, it’s another to enter a dangerous building with a bunch of excited kids, Pied Piper-style. I can’t believe there’s so little provision for them. Later, while looking at the options I find the website for SWAMP, which as initiatives go, looks ideal as a community-based organisation. Only it’s not, because as the site declares it’s a creative media centre, not a community centre. Of course, the words ‘community-based’ are used, but one could argue so are shops, factories and small businesses. A bus stop is community-based. Every enterprise is based in some kind of community, but it doesn’t mean there’s any obligation to interact with the community. 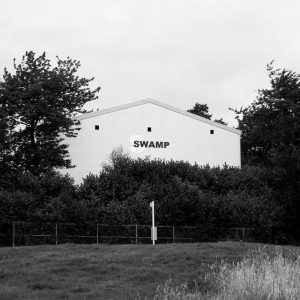 Depressingly, SWAMP’s website is written in the language of the form-filling, politically-neutered, public service professional, with its mission statements, remits, and aims and objectives, much of it written in the future tense, implying it hasn’t quite happened yet. To quote – Creative media, music and art will engage with all age groups – reads like it’s been culled from a funding application. Who are they addressing, I wonder? There’s no specific courses or workshops yet SWAMP boasts impressive facilities. And as with most ‘community-based’ organisations, it claims to deliver training while explicitly operating as a private production company, offering services in film, music, studio hire and media production, all underwritten by public money. Most embarrassing of all, a page listing SWAMP’s core staff is in Latin body text, an inexcusable oversight. There are no head shots either, making them all the more faceless.

No offence to SWAMP. I’m sure they do great work, just as I’m sure they’re compromised by the box-ticking demands of funding bodies. All I know is on two recent and separate occasions, I’ve experienced gangs of bored kids on the streets of Pollok pleading with me to teach them something or at least, to entertain them. ‘You’re dead cool’, one of the girls tells me, so maybe my old playleader skills still work. In the labyrinthine world of community ventures – so many it’s daunting to count them all – it’s hard to reconcile that so much resource is poured into schemes with so little apparent benefit for the people who need or deserve them. I ought to know, but then, I was fortunate. There was more to do in Pollok in the summer of 1968 than there is in 2008.