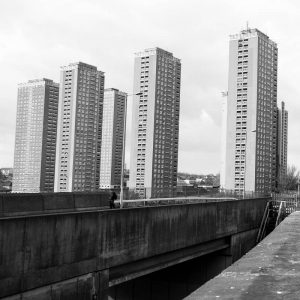 After a long cold winter, I return to my shedquarters. On the desk sits a forlorn catalogue – Witness to Mortality, published in 1997 to coincide with an exhibition by Joseph McKenzie, a photographer famed for his iconic Gorbals Children. On the cover is a bleak landscape titled The New Lifestyle 2 (Red Road Flats Newly Opened). Shot in 1968, the black and white image shows a long, empty road, slick with rain, where a solitary vehicle drives towards the vanishing point. Centre frame, a black telegraph pole divides the image, beneath which a woman in a winter coat faces the camera. On the right, startling and mysterious in the fog are two tower blocks. For me, this one picture sums up Glasgow, a heartrending sign of things to come, but somehow not the future. 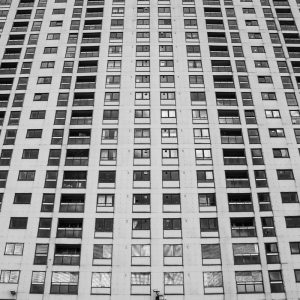 In 2006 Andrea Arnold made the admirable film, Red Road, set in the Barmulloch towerblocks. My memory of the area goes back to the 1970s, visiting schoolfriends, where one day I stood on the 31st storey of one of the blocks, reputedly the tallest domestic dwellings in Europe, looking out from a landing window across the city. It was a far more disorientating experience than I recall from my childhood, visiting Auntie Mary in her Castlemilk high-rise.

In 2002-3, during my second feature, Solid Air, I shot several scenes in tower blocks, in both Sighthill and in the Gorbals. Securing the latter location was tainted with tragedy, since the previous occupant, recently deceased, left the flat more or less intact. Whether it was relatives, neighbours or council employees who plundered the dead woman’s effects prior to our arrival, I’ll never know, but during the recce the smell was so bad some of the crew refused to enter. 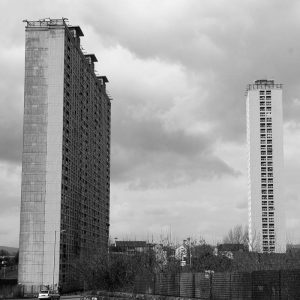 
The kids wrote it on the pavement. Big white letters. Jump.
The line I wrote was based on a true account I heard in 2000. It was an old story then. The scene wasn’t cut for reasons of content. It was simply to shorten the film. 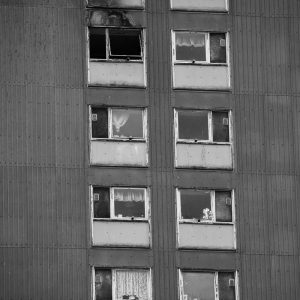 What conclusions about high-rise living can anyone make? We hear the stories, the urban myths, but until you’ve lived in one of Glasgow’s towers, all bets are off. It’s rare for Guardian journalists to get as roused by events in Glasgow as they did on March 13th, when they reported on the multiple suicide of three asylum seekers who jumped from the 15th floor of their Red Road block on March 6th, their due-date for eviction.

Yet an earlier Guardian article published on March 7 identified the dead as ‘said to be of Kosovan origin’. The phrase used – ‘close to the ground’ – struck me as wholly inappropriate in the context, a reminder that at times like these the cracks in the cutbacks facing journalism start to show. For want of a sub… 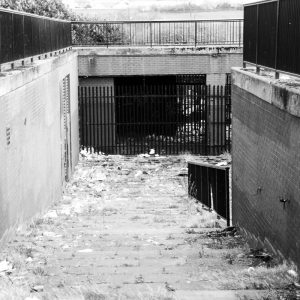 What’s at stake here is not the truth but how all the instant comment on this tragedy is rendered meaningless and devoid of inquiry. Nobody living in Petershill Drive that morning was twittering about three dead bodies lying on a grass verge. Nobody heard a thing.

As it turned out the corpses were not of Kosovan origin, but Russian: Serge Serykh, his wife, Tatiana, and – sadly – an unnamed stepson, three people who only days earlier shared a lift with their neighbours, carrying their messages, going about their business. Who knew about their eviction notice? Or the journey that led them to the Red Road flats?

Local reporting held its own, albeit reduced to a mixed and predictable blow-by-blow reckoning of events, none of which countered the line put out by the Border Control Agency, that Serykh suffered from paranoia and was deemed mentally defect, an attempt to deflect heat from their own actions. No one questioned the extent to which Serykh and his family felt the threat of the authorities. 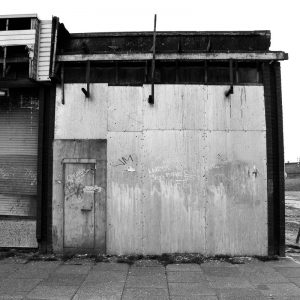 Instead we read how the concierge on duty discovered the bodies, how the immediate neighbours weren’t aware of the incident until hours later and how they held a candlelit vigil on the grass verge where the victims fell. Depending on which paper you subscribe to, reader’s comments were on a par with the worst of East Londoner’s BNP rants about sponging asylum seekers, how they get their houses furnished, while we live in shitsville. 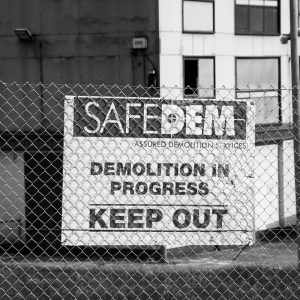 Last week I took a walk to Red Road to see for myself. Several blocks are due for demolition, the usual footpaths barricaded, much to the inconvenience of the locals warned off the territory by security firm notices. Such warnings would be useful if they also stated the date of the scheduled blowdown and the potential dangers of asbestos poisoning since, as many a monkey-dunger will testify – the moniker given to the men who sprayed the interiors of the Red Road flats with the stuff in the late 60s. Assuming they’re still alive. 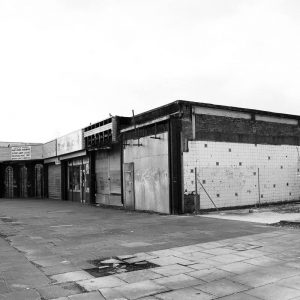 Thankfully the weather is on my side today. Walking around the Red Road/Petershill Drive blocks, it’s hard to believe you’re in a European city. The dereliction – a film set cliché of modern slums – is almost unfathomable. The Brig Bar, located in a rubble-strewn basement, is long gone. Above, a row of shops is mostly closed and shuttered, apart from a Costcutters, a pharmacy and a fast food outlet. The scene reminds me of a trip to Tblisi I made more than a decade ago in the aftermath of the civil war in Georgia. 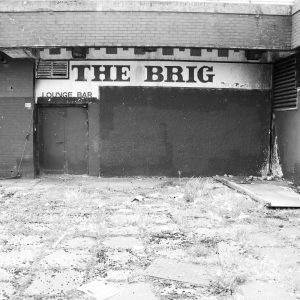 A guy comes out of the Red Road Pharmacy and approaches, as they always do when they see a camera. A Glasgow native, he’s friendly enough, his face sunken, yellowed, with a pronounced scar on his left cheek. I ask his opinion of the imminent demolition. Should’ve done it years ago, man, he replies, adding, I used to live in these flats and they were shit even then. 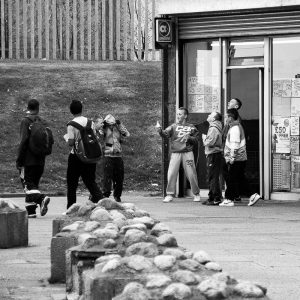 Next I see three young black boys heading home from school, running the gauntlet of a group of local white lads I spotted earlier outside Costcutters. How does this work, I wonder? What exactly is the ethnic makeup of the schools round here and how do already hard-pressed teachers negotiate their way around the prejudices and sensitivities of such a mixed group?

Rounding the corner, I watch as people come and go. Out of four blocks, I note there’s only one concierge station. But at least the kids are playing on the street and the local play park, a rare sight in any city these days. The ethnic mix is pretty evident, as Somalians, Chinese, Bangladeshis, Romanians and other nationalities I can only guess at come and go. 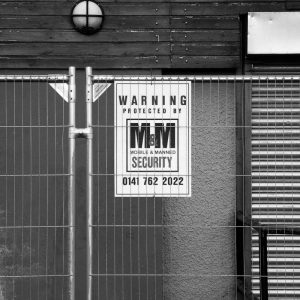 Like most outlying schemes in this city, it’s striking how few cars there are, as is parking provision – another oversight by the architects and planners who conceived of Red Road. I count twenty spaces per block, when each block houses roughly 240 adults, probably more. Plainly social engineering on this scale failed to factor-in aspiration, the notion that a working class wage could ever stretch to a Ford Cortina, Escort, Capri, Mondeo or Focus. The architects certainly didn’t futureproof their creation in terms of technology. Only one of the blocks boasts a mobile phone mast, those puny antlers that adorn most of the city’s high rises, once a source of militancy among the concerned middle classes, an issue now abated. 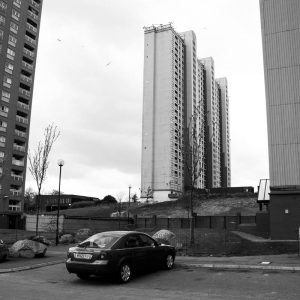 The Glasgow private taxi of choice, a Skoda Octavia, draws up. In a slow-motion sequence, out comes a white guy, pulling on his fag. It takes him a good three minutes to find and open the rear door and even longer to persuade his fellow passenger, a female, presumably his girlfriend, to get out. By the way they cling to one another, the pair are either gouching, drunk or otherwise debilitated, as they weave their way up the path towards one of the blocks. At this point I wonder – what impression do the non-indigenous have of the locals? Every white person I’ve seen here today looks like an early Peter Howson drawing – rail-thin, wax-skinned, hollowed out humanity.

With the forthcoming election, I muse on how many people here have the right to vote and how many will bother to exercise that right. In the end, what does it matter which country you’re from – Scotland included – when what you’re living with is intolerable? Seeking asylum, or refuge from the root cause – poverty – is entirely legitimate. But with immigration the hot issue in the coming election and the indigenous poor set to suffer most from cuts to public services, the outcome bodes ill for all. That said, there are conspicuous community ventures in the Red Road area where good work happens against the odds. The local nursery school with its garden is an optimistic counter to the fort-like boarded-up pubs and bookies. 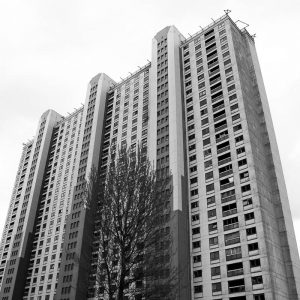 I note the pine trees, a plaintive stab at landscaping. Here rugged boulders conjure in miniature a Highland scene, a place of the imagination, of solace. Standing on a grass verge I look up at one of the blocks, counting to the fifteenth floor. I stop short of imagining the last words and thoughts of the three members of the Serykh family that March night as they stood together on their veranda before mounting the thin divide separating them from the void. 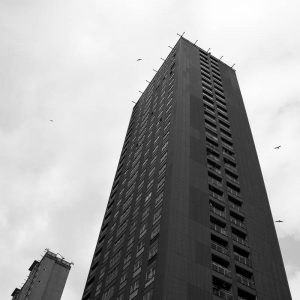 When the blocks do come down, I hope the trees don’t fall with them. The Serykhs were only one of the 670 families of similar status living in the blocks. As I leave, I’m chastened by the thought that we’re all only two paycheques away from the gutter, no matter where we come from.