X marks the spot. The phrase originates from the early days of press photography where the scene of a crime was marked with the letter X. So when I look up Cathkin Braes on Harry Bell’s Glasgow Network of Aligned Sites, I’m intrigued to find a large X crossing the site, situated – it’s claimed – on the thirteenth hole of the Cathkin Braes golf course.

One line of the X passes through the Camphill Earthwork from Mains Castle and motte in the south-east to the Cochno Stone in the north-west. The other goes from the Craw Stane in the south-west stretching (by my eye) imperfectly north-east to the Carmyle Fords. Whether these lines can be considered leys is doubtful, having so few sites attached to them, but judging by its position the Cathkin Braes was certainly a strategic site for our ancestors.

I have only the vaguest memory of visiting Cathkin Braes, most likely with my maternal grandparents who lived in neighbouring Ardencraig Road, Castlemilk. The site is the highest point in the Glasgow area, 200 metres above sea level and in 1995 was established as a country park covering 199 hectares and run by the city council. Originally this land was bequeathed to the city in 1887 by millionaire philanthropist, James Dick, on condition that it should be left wild and free to roam in. Long before Mr Dick owned it, the land formed part of the then larger Castlemilk Estate owned by Sir John Stuart. Before him the hills were inhabited by a Celtic Iron Age tribe known as the Damnonii, or Damnii, mentioned by Ptolemy and whose origins were Bythonic, and very possibly Pictish. 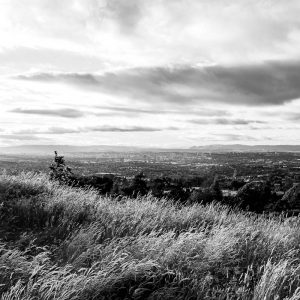 I set off on a beautiful sunlit evening, passing through Castlemilk and Carmunnock village on the B759. I’m less interested in the golf course than in capturing the spectacular views. After a trudge through tall grass and a scramble up a steep slope, I position my camera looking north across the city. The panorama is worth the effort but this evening there’s a heavy breeze and poor visibility due to the haze. That, or my eyesight’s getting worse. I can make out Gleniffer Braes in Paisley and the outline of the Kilpatrick Hills but can’t quite single out the profiles of Duncolm and Dumgoyne. The city council website mentions a landmark – Queen Mary’s Seat – a cairn marking the spot from where Mary, Queen of Scots is said to watched her troops defeated in the Battle of Langside on the 13th May 1558, ten years earlier than the actual date of the battle. Still, whatever the decade, Mary must have been light on her feet, since records also have her watching the battle from Crookston Castle and at the Court Knowe near Cathcart Castle, the invisible remains of which are in Linn Park.

More recently, in November 2001, the park became the scene of a murder when the body of ex-Strathclyde police officer, Gordon Gibson, was discovered with 21 stab wounds. His burnt-out car was also found. A BBC News item stated how three men, William Wilson, Stephen Bates and Carl Anderson were charged but all were acquitted. The victim’s widow claimed that her husband suffered from depression as a result of his contact with the dead victims of the Lockerbie disaster. Gibson would often visit the Braes for ‘peace of mind’ and on the night of his killing he had come off a 12-hour shift as a security guard. In true tabloid fashion the item concludes with a barbed inference, of how court witnesses stated that Cathkin Braes car park was popular with gay men and voyeurs, and that ‘sex games’ were a frequent occurrence. 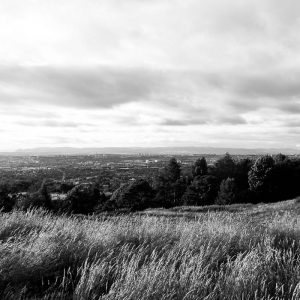 In May 2008, Jack McGill, an ex-professional boxer, was found hanging from a tree in the wood. McGill, uncle of former WBO Featherweight champion boxer, the troubled Scott Harrison, was facing extradition charges to Spain where alongside his nephew, he was accused of assaulting a police officer and attempting to steal a car. According to the Daily Record and in a facsimile of a tragic Hollywood B movie it was suggested McGill was due to take the rap in a bid to save his nephew’s career. McGill and Harrison join the history of Scottish – and especially Glaswegian – fighters whose stratospheric achievements took a dive alongside the likes of Benny Lynch, Jim Higgins and Paul Weir whose short-lived triumphs would be superseded by alcohol, drugs, infamy, poverty and ignoble, untimely deaths. The air is filled with shouts that reverberate across the braes. A couple of hundred yards away I spot a gang of youths hanging out near the tower. They can see me but don’t approach, doubtless incurious, too deep in testosterone and their Y-chromosomes to pay me much mind. Watching them spar in the lengthening shadows, I reflect – any of them could be those young boxers or even Mary’s doomed foot soldiers. But what do I know? More to the point, what do they care?