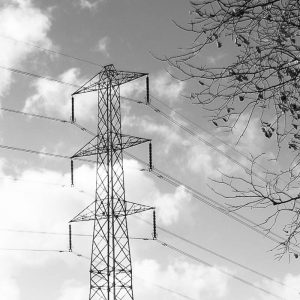 The compulsion isn’t new. Whether it’s urban exploration, fugueing, psychogeography or – as my mother would say – wandering like a fart in a trance, the urge to explore exerts an irresistible pull. Abandoned lunatic asylums come high on the list, as do decommissioned schools, old churches and cemeteries.

These peripatetic diversions differ from say, the study of local history or archaeology due to their random nature and apparent lack of focus. Unlike in London, where the practice of psychogeography has long been well-quoted by a loose orbit of the like-minded, there are few practitioners in Scotland and those who are visible tend to be artists and enthusiastic amateurs, (same difference in these parts) not historians and writers.

In reading these accounts, I find a fondness for literary, geographic and philosophical quotation, a fumbling for coincidence and psychic connections in an attempt to circumscribe the chaos arising from not being in full possession of the facts. The term ‘flâneur’ crops up regularly in these writings, like it’s some kind of job description, just as certain sites recur: St Peter’s Seminary at Cardross is popular, as is the Glasgow Necropolis and the source of the Molendinar, though I’m unsure why some sites have a particular draw over others. What do we look for when we go to these places? And what do we take from them? And in the context of this project, can it be categorised as art?

I know this much – nobody else appears to be filming these sites. There are plenty of photographs circulating online from numerous sources, but that’s not what this particular project is about. Reviewing the material shot at De’il’s Plantin, I look for connections between the images I’ve shot while thinking about maps, alignments and the purpose of this journey – collecting the myths and truths – and where one starts and the other ends. Bonnyton Mound was where Harry Bell set out from on his quest to find a ley, a straight line passing through more than three sites. What I see on screen is a set of electric pylons forming patterns against the sky, not unlike the alignments and axes on maps or those on Google Earth. Are there any rational connections to be made here? 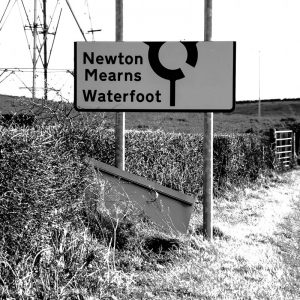 A second shot features the low winter light on the trees casting shadows that draw similar lines on the ground. Another shot features two cyclists passing on the Humbie Road, unaware of my camera. I recall from Harry Bell’s writing a reference to cycling, of how he wouldn’t want to cycle past the De’il’s Plantin at night. Then I notice a roadsign, its topmost section missing, of a roundabout symbol that’s not quite a closed circle, an incomplete ouroboros. The irony doesn’t escape me, suggesting the way ahead is unclear, a mystery, even. But it might help if I had a better shot of the sign. 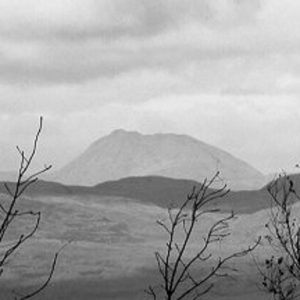 I drive in the low autumn sun back to Glasgow and the Devil’s Plantation for another look. My aim is to get a good shot of that broken road sign next to the mound and clearer shots of Duncolm Hill. Climbing over the barbed wire fence with tripod and camera I reach the top, but I’m soon stopped in my tracks. A little distance away a man in a Barbour jacket is chopping the limbs off some fallen trees. Afraid of being driven off the land, I retreat – over the fence and round the corner, where in a lay-by I find a small silver car. For some inexplicable reason, there’s a hideous smell here, not the common agricultural aromas but something sulphuric and vaguely toxic.

The wood-chopper fails to notice me so I set up my camera to take shots of Duncolm. Then a bizarre thing occurs. I scan the horizon but I can’t seem to locate the hill. Today the visibility is better than my last trip here, so how does a hill, 401 metres high, disappear like that? I make out the more distant peak of Dumgoyne, further north and to the east, but no Duncolm. Zooming in, I shoot what I take to be the hill, with its highly distinctive flat top – but I’m not 100% positive. Is the light playing tricks, I wonder?

From the mound I drive to Newton Mearns to find Mearnskirk Hospital, one of three sanatoria opened by Glasgow Corporation for the treatment of tuberculosis. On the way I pass the old Mearns Kirk with its ancient graveyard but it’s not what I’ve come to see, not today. Finally I locate the entrance to the hospital and glimpse its curious, quasi Queen Anne-style red brick facades. 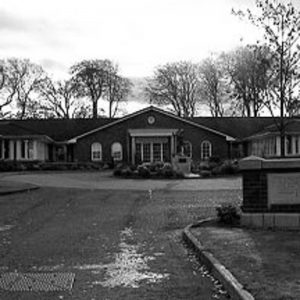 Mearnskirk no longer functions as a hospital. Well, not much of it. Most of the buildings have been converted into a Stepford Wives-type housing development. Others are new-build, mimicking the style of the originals. Yet for all its prim orderliness the place is foreboding. There are ghosts here that I associate with the horrors of isolation and terminal illness. This is where my sister spent most of her early childhood, afflicted by a tubercular infection of the knee joint for which she had to wear calipers. It’s also where my paternal grandmother lay like a pile of sticks in a cot, wracked with cancer until she died, following years of radiotherapy. In both cases, on visiting days I would make the interminable journey from the city, taking a red Midland bus beyond the city’s borders. I also have a vague recollection of my uncle working at the hospital, of visiting him in a wooden hut lined with prosthetic limbs and ominous-looking surgical devices. But like the disappearing hill earlier, I wonder if my memory’s playing tricks.

A small part of the grounds is maintained by the NHS as Mearnskirk House which these days specialises in ‘elderly medicine’ and not the care of children, its original purpose. As cars arrive, the visiting occupants look grim-faced as they enter the low building. They barely notice my camera as I take shots of the exterior and the Peter Pan statue, erected in 1949 in memory of Dr. John A. Wilson, OBE, the first Superintendent of Mearnskirk. Oddly the date on the current plaque – 1928 – is two years out of sync with the hospital’s opening on May 1st 1930, according to records kept at the Royal College of Surgeons and Physicians in Glasgow. 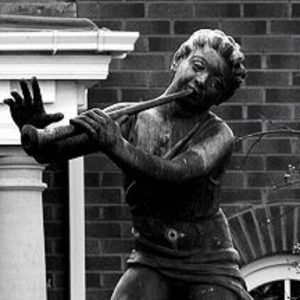 From Mearnskirk I drive to Pollok Estate but on this sunny Sunday afternoon find it impossible to get close to my next targets: the site of Nether Pollok Castle, Pollok House and an expanse of grassland near the Burrell Museum, a place I visited often during my teens. Is it any coincidence then that one of Harry’s lines runs straight through this spot? I’ve always felt this particular corner of the estate had some kind of resonance, the precise nature of which eludes me, so I call it a day. The park is busy and for some reason I don’t feel I’m getting the right information. Later, it turns out I’ve been proved right. Reviewing the day’s footage, I realise the hill I shot at Bonnyton isn’t Duncolm after all. Visibility’s not all its cracked up to be.