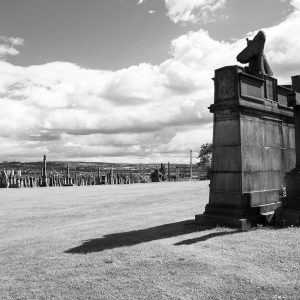 It’s July and the rain – alien, sub-tropical rain, not normal Glasgow rain – is so torrential and persistent it takes over a week after my walk with Ronnie Scott to return to the Necropolis to shoot material for this project. A worn-out film adage – ‘you can’t buy the weather’ – never rang truer than during a Glasgow summer. But I’m not in the market for artificial continuity, so I have to go with what I’m given. Actuality wins the day.

Now, I realise, isn’t the ideal time to be shooting sightlines across the city. Like the Camphill Earthwork, a vantage point is no guarantee of a clear view and with trees in full foliage, whole hill ranges are obscured. I literally can’t see the woods for the trees. Re-reading The Secret Geometry of Glasgow, I get no sense that Harry Bell is interested in the Necropolis as a place, only in its position in relation to a network of other places. I’ve counted 12 lines that either stop or pass through the Necropolis, not all of them leys – not that Harry Bell subscribed to the idea of leylines in the sense that most people do – of earth energies or even spiritual paths. This thought, and a random remark by my husband, gets me thinking. 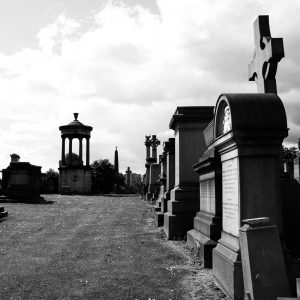 How come Harry never found any sites on tower blocks? he asks. Good question. But poring over my Ordnance Survey maps and the sites plotted on Google Earth, I’m at a loss to answer. Sure enough, most of Harry Bell’s PSAs (Prehistoric Site Alignments – the term he coined to describe his findings) appear to be located on ancient sites. Then, didn’t he follow Alfred Watkins’ lead, he of The Old Straight Track, starting out with mounds, castles and ancient churches? It’s unlikely that a city council, not even one as rapacious as Glasgow, would be allowed to build on old and sacred ground. The only example of recent – i.e. 20th century – construction I could find is the site of St Enoch’s Sanctuary, but I may be wrong.

So it’s back to the Necropolis. Yesterday rain had stopped play, leaving me to shelter opposite the John Knox Street gates for a full hour before giving up. Here I watched three women standing under umbrellas while waiting for the Inner Circle bus, a remnant of the city’s underground renovation during the late seventies. I thought, idly, wait a minute, since when did the underground ever run this far east? Who knows where the Outer Circle goes?

The following afternoon, under half-cerulean, half-concrete skies. I decide to chance it. Hauling out the kit – heavy tripod, camera jostling with a flask of tea, spare tapes and batteries – I balance my load, despairing at my lack of resource and cursing the lot of the low-budget filmmaker, a self-pitying exercise in subsidised moaning. Shut up, shouts the angel on my shoulder. I struggle over the Bridge of Sighs and, after bagging a shot of the Façade that for once doesn’t include an industrial lawnmower, head straight for the Jewish Section.

I’m rewarded for my effort. The light in this otherwise dim corner is amazing, ethereal almost, the kind of light upmarket film productions pay a lot of money for. Only in that scenario, the sound guy would be pulling his hair out, since the air hums with the guttural rasp of a heavy-duty strimmer ripping the undergrowth. 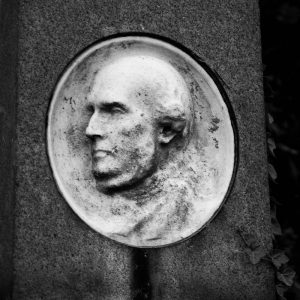 Thankfully sound’s not an issue. I get my shots, revelling in the dappled sunlight. Climbing the stone steps, I chance on two of the Land Services guys I met on my previous visit. Sure enough, they’re wielding an industrial strimmer. One of the guys explains how they’ve just reduced an 18 feet hedge to almost ground level to deter the junkies. Clearly the guy cares about his job, telling me how he regularly helps ex-pat tourists to locate their family’s lairs, unlike the council who, charging a fee for the same service, often fail to come up with a prompt or accurate answer. 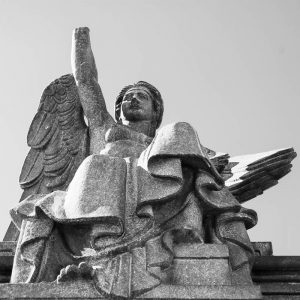 He poses a rhetorical question – why won’t the council won’t let us clear the ivy off the monuments? A lot of these are sandstone, he says, they get ruined. Why indeed, I ask. He tells me that for ‘artistic reasons’ the council encourages ivy to flourish, a kind of theme park mentality where to succeed as tourist destinations, old cemeteries must obey the cliché, in this case a Victorian Gothic cliché, of crumbling masonry, broken statuary and overgrown creepers. I mean, folk travel from the US, Canada and Australia to visit here, the man laments. 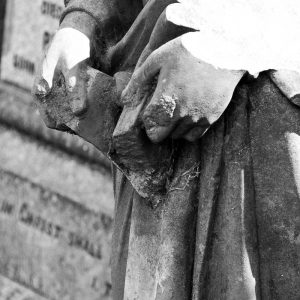 As a parting gift he hands me a print copy of the Glasgow Necropolis Heritage Trail. On the back page I notice a reference to Charles Rennie Mackintosh, omitted in the online version, that co-opts his childhood home at number 2, Fir Park Terrace, Dennistoun, and posits the theory that since the architect lived near the cemetery surely he must have felt its influence. It’s too flimsy a notion to take seriously. Besides, I can’t find any obvious aesthetic links between the monuments on display here and the architect’s output. Interestingly, the guide states that the Necropolis contains several examples of his work, including his own headstone, but stops short of telling us its precise location. Who knows, maybe it’s too embarrassingly unremarkable to mention.

I continue up the path, replicating most of the journey I took here a week ago, stopping for long takes of several of the monuments. It’s contemplative and absorbing work, composing shots, waiting for weather. Parties of German and Spanish tourists pass by, disinterested in me and my camera. What do they make of this place, I wonder, with its junkies, danger signs and ivy-choked monuments? 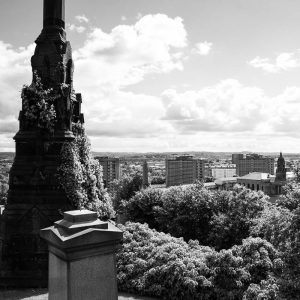 At the summit I attempt to get some decent shots of the view. Scanning the horizon, I strain to find the flagpole in Queen’s Park. No can do. Strange to think that only the other evening while out walking in the park, I could make out the Cathedral roof quite easily from that now distant spot. Maybe there’s too much building going on, too much for the eye to take in. So much for sightlines, I tell myself as I pack up to leave. If, as is claimed, the Clyde Valley was covered in trees 6000 years ago, living on hills would have made perfect sense. But from where I’m standing, either my eyesight’s getting worse or our ancestors didn’t give much thought to their neighbours. Pretty much like this place, I muse, as I hurry to escape the imminent downpour.