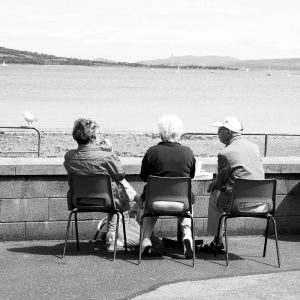 Until recent times the Glasgow Fair Fortnight meant an enforced two-week break in mid-July, when most of the city’s workforce departed to points south and west, known colloquially as going doon the watter. Rothesay on the Isle of Bute was the resort of choice within our family, having rejected Dunoon after a miserable holiday spent in quarantine when my siblings and me went down with rubella and when on another occasion I almost drowned, fully clothed, in the town’s outdoor swimming pool. Oh, happy days… 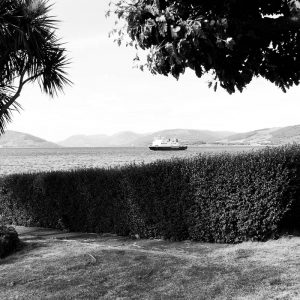 Today that same journey is not the odyssey recalled from childhood, one requiring a train from Central Station to Wemyss Bay or by the longer, more exotic route by boat all the way from Broomielaw, navigating the Firth of Clyde to Bute. In under an hour, the sat nav guides me from the city centre to the westbound M8, passing Paisley, Port Glasgow and Greenock to the rail and ferry terminal at Wemyss Bay, a mere 26 miles. 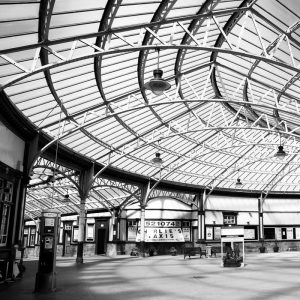 There’s time to explore the railway station before crossing the Firth of Clyde. I’ve always been fond of railway stations and the interior of Wemyss Bay is a thing of beauty. Designed in 1903 by James Miller, it is a Grade A listed building with an elegant circular central hub built of glass and cast iron, the type of public building that inspires and elevates the user, a place that could never be built today. 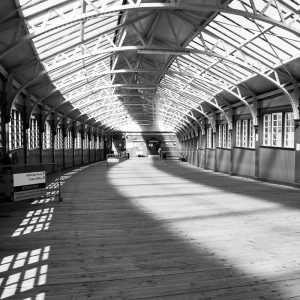 On the snaking timber boardwalk, once the pathway for foot passengers, immediately I’m transported to those distant Fair holidays, recalling the thrill of the journey for me and the tens of thousands who trod these boards for the best part of a century. 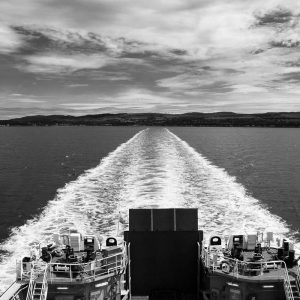 On this sunny summer Sunday, the peak of the high season, most passengers board the M.V. Bute by car. Given the short duration of the crossing and the monopoly held by operators, Caledonian McBrayne, it’s an expensive 45-minute trip, so no surprise that the ferry’s barely a third full. For this reason – and the advent of cheap package holidays – by the 1970s Rothesay’s status as a holiday resort declined, a fact all too apparent as I disembark and drive round town to get my bearings. 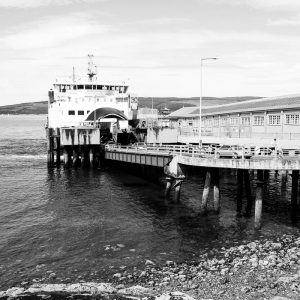 Such nostalgia is flawed, of course. For the women of Glasgow, the Fair Fortnight had little fair to commend it. During the countdown to Fair Friday, the day closest to July 14, when men laid down their tools, the women, most of whom worked in factories, shops and offices (in addition to housework and child rearing) had already toiled for weeks. Their task – to pack large wicker hampers with bed linen, towels and clothes – items to be sent ahead to the chosen destination since by necessity most families could only swap their rented city slums for rented coastal slums, hotels and B&Bs reserved for their affluent betters. 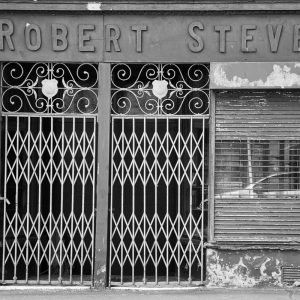 Accommodation, obtained through small ads in the Daily Record, was generally limited to a few damp, barely furnished rooms and an outside toilet. Like home, gas and electricity came attached to a coin meter. From the minute families stepped off the boat, the women were left to drudge domestic chores while their men ambled to the nearest betting shop or bar. Depending on the weather, we kids were either packed off to the amusements or the promenade. To diehard urbanites, outdoor pursuits were alien. Few Glaswegians arrived in Rothesay with walking boots and knapsacks, preferring familiar attractions: dances at the Pavilion, variety acts at the Winter Garden and double features at the Regal Cinema on rainy afternoons. 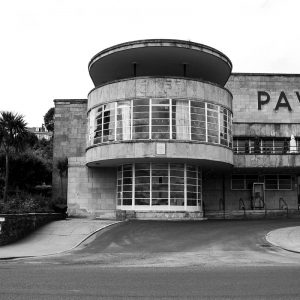 
Rothesay, watering-place, royal and police burgh… town of Buteshire, on E. side of Bute island, Firth of Clyde, 19 miles SW. of Greenock… 3 Banks, 5 newspapers. Market-day Wednesday. The town is finely situated at the head of Rothesay Bay, enjoys a mild climate, and is a favourite watering-place and a centre for visiting places on the Clyde. There is a good harbour. There are also fine esplanades, an aquarium, and a hydropathic establishment. Rothesay Castle, founded about 1098, and once a royal residence, stands near the centre of the town. Rothesay gives the title of duke to the heir-apparent of the British throne.

I stop at The Pavilion. Designed by J. & J.A. Carrick and opened in July 1938, its grey exterior intact if grizzled, no match for the restored splendour of its celebrated cousin, the De La Warr Pavilion, Bexhill-on-Sea. As with most cash-strapped public venues, a closer look reveals The Pavilion’s antithetical add-ons: garish posters for non-events, bits of brewery detritus, stick-on signage, light fittings and furnishings commissioned by the lowest tender bid. 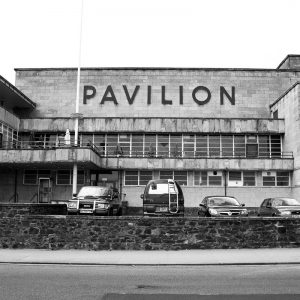 So it’s encouraging to learn that a long-awaited refurb for this grade A listed building, quoted as ‘one of Scotland’s best example of 1930s Art Deco architecture’ is to be undertaken by architects, Elder and Cannon, that is, if the Argyll and Bute Council’s ambition can be realised at a time of deep public sector cuts. 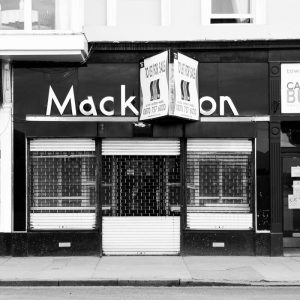 The neglect of The Pavilion, like other Deco gems (see above) is neither wilful nor malign, more the cumulative effect of an identity crisis, a loss of civic faith exacerbated by council cutbacks and over-regulation. If the Pavilion’s refurb does go ahead, those involved would do well to remember that at its peak of popularity Rothesay never aspired to attract the affluent, aesthetically literate tourist. Today the town has enough trouble attracting anybody.

The demolition in 1976 of the Regal Cinema, another notable example of provincial 1930s Deco, was arguably shortsighted since no replacement was ever built. Reports of redevelopment in the late 1970s and 80s – a marina complex, a heliport – came to nothing. At best, new attractions were created out of the old, such as the Victorian Toilets. At worst, the closure of the Royal Hotel, situated prominently opposite the ferry terminal, is a depressing introduction for any visitor to the island. 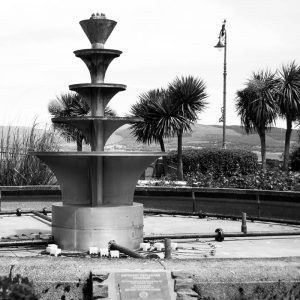 On my way to the Winter Gardens on Victoria Street, I’m reacquainted with the concrete fountain, predictably no longer functioning, where at some point in the mid 1960s, my sister and I, wearing identical clothes, posed for a snapshot. The nearby rose garden, well tended, is still in bloom, but the floral clock, an exotic feature etched deep in my memory, is missing. 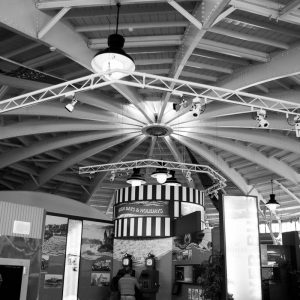 In the absence of attractions, like so many British seaside resorts, how can Rothesay hope to draw visitors? Perhaps the answer lies in the Winter Garden, built in a quasi-Chinese style in 1924 to enclose an existing open-air amphitheatre. Following refurbishment in the 1990s, today the Garden operates as a small cinema and tourist centre, boasting the type of multi-media exhibition to be found wherever real regenerative measures are lacking. Disappointingly, the interactive map is out of order. 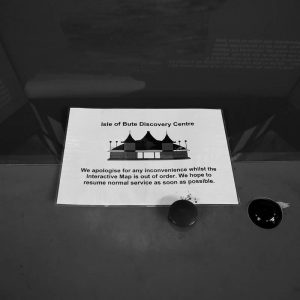 Here are telling clues to Rothesay’s current predicament. Retrospective, backward glancing, on the one hand visitors are offered a version of the ‘past’ – the salad days of a bustling resort and industrialist’s playground – most of the handsome villas and hotels here date from the mid 19th century. On the other is the fallback of the island’s wildlife and much extolling of Bute’s gentle landscape, natural assets that always existed. The obvious question – how to create a profit centre when market forces are so fiercely resistant – goes unanswered. Any attempts to construct a brand out of Bute seem futile when a walk down Victoria and Montague Streets, with many shops and bars permanently shuttered, tells a different story. 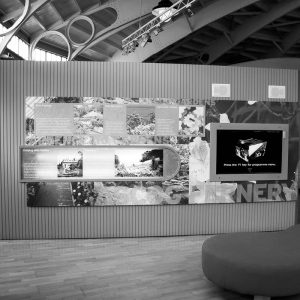 Rothesay’s narrative – from old market town to thriving resort – is told through artefacts and photographs. Adorning one wall are theatrical posters and handbills, a wall of fame dedicated to variety hall acts who during the 1950s and 60s played the summer season: Lex McLean, Johnny Beattie, Chic Murray, Jimmy Logan, The Alexander Brothers. Popular locally, these entertainers, despite the vast TV viewing figures of the times, remained obscure because few ever penetrated the medium. 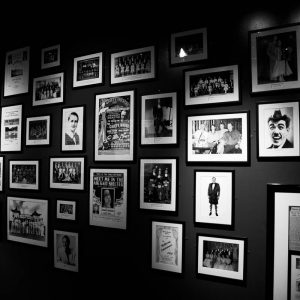 One entertainer did. Greenock-born and Rothesay-raised, child star Lena Zavaroni’s appearance on ITV’s Opportunity Knocks in 1974 led to a successful singing career, which at its peak included numerous prime time TV slots. Sharing the bill alongside Frank Sinatra and Lucille Ball, at her peak, Lena sang at The White House for Gerald Ford and was briefly signed to Stax Records. She also hosted her own TV series.

For years, Lena Zavaroni’s short life and tragic death provided the base metal for TV and literary gold. The eating disorder that killed the singer at the age of 35 is well documented in both fiction and fact, notably in Andrew O’Hagan’s Personality. Tucked in a corner, I encounter a shrine, a statue of a girl child surrounded by handwritten greetings cards. Beneath a plaque reads – Lena Zavaroni – So Loved. On a nearby wall is a photograph of the singer, alongside an incongruous CCTV notice and a letter from an eating disorder charity. As tributes go, it’s heartbreakingly poignant. 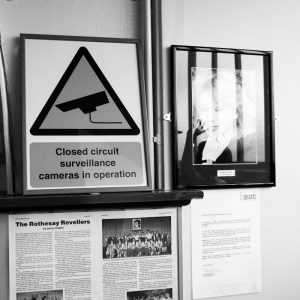 Bute is an island of rolling hills and secluded beaches. Passing the picturesque town of Port Bannatyne, I arrive at Ettrick Bay, a wide stretch of blonde beach which on this sunniest of June Sundays is almost deserted, the few visitors sticking mainly to the shoreside cafe. While eating my picnic lunch on a bench, I reflect on the only other occasion I visited this place, an impromptu outing during my family’s last holiday to Rothesay in the early 1970s. On the cusp of puberty – I was about 12 at the time – I felt a crippling self-consciousness as I entered the water, fully clothed, while a strange man leered at me before casually remarking, to my parents’ horror, on my jailbait allure. 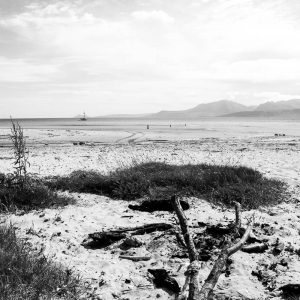 Moving on, I follow the road to nowhere in particular and, by chance, arrive at a path leading to an even less populated beach at Scalpsie. It’s hard to grasp that so secluded a spot is within reach in only 90 minutes of leaving the city. It occurs to me that the local council and tourist agencies are missing a trick. Surely the selling point of Bute is escape, freedom even. Under glorious blue skies, the dreamscape of Scalpsie feels like a thousand miles from Glasgow. 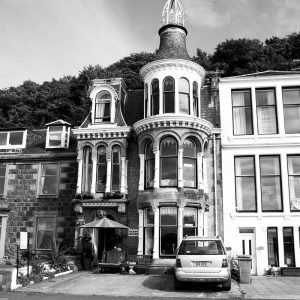 Back in Rothesay, I wander round the town, searching for traces of old haunts. What am I looking for? At home, in a drawer somewhere is a reel of S8mm film shot by my maternal grandfather in the 1960s, of my six-year-old self running down Bishop Street. Pausing at an estate agents’ window, I note that the upper part of a house where we once stayed is for sale but ‘requires some interior upgrading’ – agent-speak for dilapidated dump. Virtually everything is closed for the day – the gift shops and cafes – or for good – mainly bars and one-man businesses. On the esplanade I note the splendid Victorian facades, mostly converted to small hotels and B&Bs – and mostly vacant. 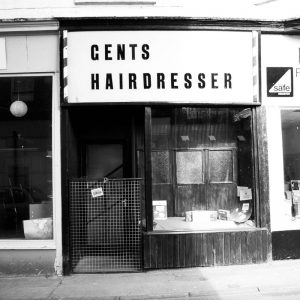 But my mission isn’t complete, not without a look at one of my favourite places, The Electric Bakery. On the way, I pass a barber’s shop, its window display unchanged since the 70s. The bakery, where as a kid I would wait late into the night for well-fired rolls and iced buns, still exists and I take some comfort from this crumb of continuity. 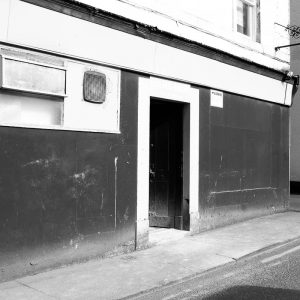 Leaving the island, I’m reminded of a quote by Joan Didion:


A place belongs to whoever claims it hardest, remembers it most obsessively, wrenches it from itself, shapes it, renders it, loves it so radically that he remakes it in his own image.
If love could bring about a change of fortune for Rothesay, then I’m certain thousands of Glaswegians would gladly give it. Just don’t ask them to give up their fortnight in Majorca.
‹ ›