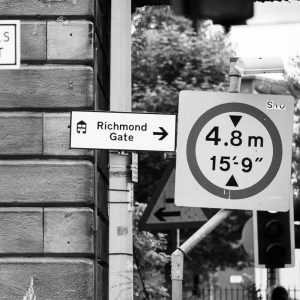 Recently I invented a new game. It’s called Xanadu, after Kubla Khan’s legendary summer palace and of course, the film Citizen Kane. The rules are simple. You walk, cycle or drive in your local area, bagging as many black-on-yellow signs – the ones pointing to new housing developments – as possible. There are two prizes – the one who gets the most signs and can remember their names and one for the most ridiculous – not as easy as it sounds, since most of them qualify.

While tower blocks here crash down in the space of seconds, I’m intrigued by this plague, or rather, pandemic, of signs, like weeds on wasteground, cropping up all over the city. Known in the trade as ‘temporary directional signs’ or ‘AA signs’ they’re designed, as one leading manufacturer, Bristol-based TGS promises – ‘to provide a means for potential visitors to be directed straight to your development‘. Liasing with local road authorities, TGS, working with the AA and RAC, erects these plates, made of reflective-coated 3mm aluminium, in locations the length and breadth of the country. In other words, a place near you. 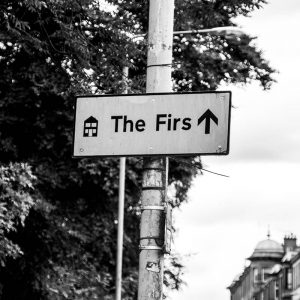 Recently I spotted an AA van illegally parked in Pollokshaws Road. Watching a man attach one of these signs to a lamppost, I thought, what kind of commerce is this? Who can squeeze a buck out of it? Plenty, it seems. Obviously the companies producing them turn a profit, as do the motoring organisations erecting them. And because planning permission is requisite, local councils are also cashing in, some more responsibly than others, by restricting their numbers and hence the amount of visual pollution on our streets. 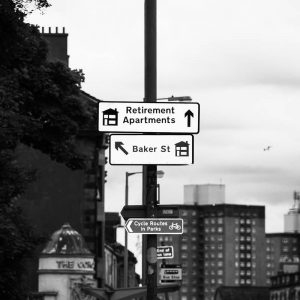 But not in Glasgow, judging by their proliferation. On highways, there’s barely a vacant lamppost to be found. Meanwhile in June last year the city awarded a nine-year contract to billboard giant, Clear Channel Outdoor UK, to operate what the City calls “landmark advertising on island sites and roundabout locations in council ownership“. But let’s not dwell on the potential safety hazards of distracting signage on roundabouts. Surely all this extra revenue the council earns keeps our council tax down and our public services secure? Well, no. Not when the city, in a move to dodge the differential on gender-discriminatory wages, is currently contracting out low-paid jobs in Direct and Care Services department and closing down public toilets. 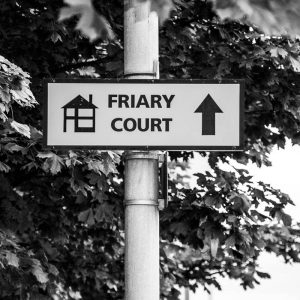 Elsewhere I’ve commented on the names housing developers dream up to flog their wares. Lately I’ve spotted the following – Utopia, Paragon, Aspire, The Plaza, Netherby Lawns, Lomond Gate, Richmond Gate, The Firs, Friary Court, Adelphi Court, Southgate, The Junction, Baker Street, Regent Mews, Verde and, best of all, Equilibrium – all roughly within a one-mile radius of where I live. There’s probably more but it’s easy to lose count. Most of the names are meaningless in the context of their locations, but that’s not the point. The point is to lure would-be buyers into imagining themselves residing in courts or mews or lawns or gates and not some pile of cladded breezeblock hastily thrown up in the gaps left by extinct industries or the sites of freshly demolished social housing. 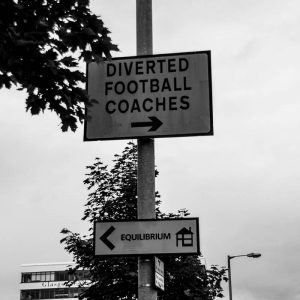 It’s nothing new, especially in Glasgow. Money has always determined who gets to name our streets and districts. With few exceptions – the nod to Adelphi or Friary for instance – that at least attempt to refer to the past, most of these new names are absurd and for this city, curiously Anglo-centric. In Glasgow, to call a development Netherby Lawns borders on the surreal which, like the title of a bad soap opera, conjures up visions of wife-swapping parties, domestic violence, repossession of the 4×4 and sundry mid-life crises. In the case of Netherby Lawns, you also have the misfortunate coupling of nether, meaning beneath or under, as in nether regions, with lawn, a stretch of grass. Are the developers aware or just having a sardonic laugh? 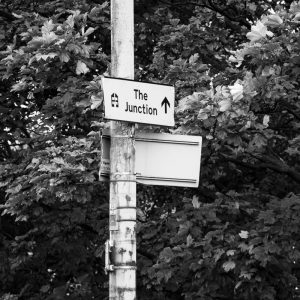 In architects’ and planning offices there must be many a well-thumbed dictionary in the frantic search for a killer brand. Rather than look at old maps or conduct research into local histories, developers seem content to employ names and titles even that old dystopian Ballard would have rejected. And it simply doesn’t play here. Take my own personal favourite, Equilibrium. Less a moniker for a cheap after-shave or a bad 80s band than a place to hang your hat.

And where do you live?

Oh, we just bought a duplex at Equilibrium.

I can just hear it now. In a full-on Glasgow accent. The proud buyers of these non-places are the ones doing the paying, not only for the flat, but also the sign downstairs pointing out the absurdity of its name to everyone and their dog.