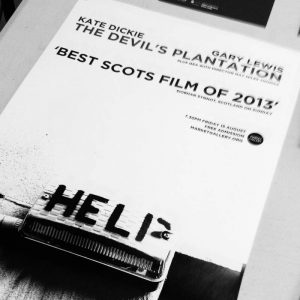 After its recent outings at the CCA and at Diorama in Oslo, I’m pleased to announce that the movie version of TDP is screening at the Glad Cafe on Friday, 11th July. I live close to the Glad and since much of the film was shot on the southside, it’s great to screen it there, one of the few venues south of the Clyde that shows films.

I’m especially pleased that the wonderful actor, Gary Lewis, who narrates half the film alongside the lovely Kate Dickie, will be with me on the night to chat with the audience after the screening.

Of course, with no distributor behind it, the film has none of the usual trappings, such as a press kit or DVD – apart from the handful of screeners burned by my partner. There’s no official poster either, apart from the one we knocked out yesterday for the Glad.

So please come and lend your support to what Siobhan Synnot, Scotland on Sunday’s film critic, describes as the best Scottish film of 2013. I guarantee you’ll learn more about Glasgow than you think – you might even be inspired to take a few trips of your own!