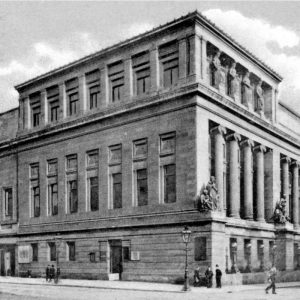 Anyone entering by the front door may have noticed that The Devil’s Plantation recently won the BAFTA New Talent Award in the Interactive category, an unexpected but very welcome prize. But unlike the previous awards given that evening and prior to the announcement, this category prompted a long speech referring to new media and young talent. In a mix of elation and rare confidence I mounted the stage where during my fleeting moment of glory I delivered thank-yous and a reminder that ‘young’ ought not to be equated with ‘new’, all the while thinking but not stating my conviction that talent is talent regardless of age, gender, race or creed. I got a warm response – I think – not that I recall much, being whisked off for the obligatory photograph that in the way of these events I will probably never get to see.

The ceremony was staged at the Mitchell Theatre, formerly known as St. Andrew’s Halls, originally designed in 1873 by James Sellars, an acolyte of Alexander ‘Greek’ Thomson, and built between 1873-1878 in the Greek Revivalist style. The exterior, with statuary by John Mossman, resembles a Hollywood silent-era extravaganza and thankfully is almost intact. Much has been said of the Grand Hall, with its capacity of 4000 and near-perfect acoustics. 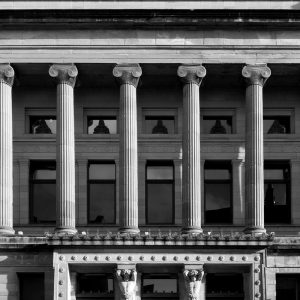 Tragically in late October 1962, at the height of the Cuban Missile crisis, the Grand Hall staged a boxing tournament after which, according to Frank Wordsall, the building went down in flames, yet another fire in a long list of fires resulting in the loss of Glasgow’s most precious buildings. During refurbishment, St. Andrew’s Halls – the grand room in particular – was greatly reduced in scale. The main arena, renamed The Mitchell Theatre, now has a capacity of 418. Back then, with mutually-assured destruction occupying our minds, the fire only made it to page 2 of The Evening Times.

Apart from memories, all that remains of the Grand Hall is a photograph, a reminder of how small our ambitions and achievements are today. With this in mind, I note that the 2010 BAFTA New Talent Awards has not received any coverage. A sign of the Times?