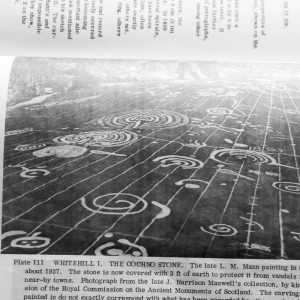 Yesterday I posted a short video about the recent test dig at the Cochno Stone on Vimeo.

Back in early September I didn’t intend to do anything other than record the dig for archival purposes since a wholesale excavation and replication of the Stone has yet to be determined. But having shot over three days I realised the value of making a video not because I’ve been commissioned – I haven’t – but to get to grips with my new edit suite and test the various tools in preparation for my next feature film, Voyageuse.

So far the response – over 100 views in less than 12 hours – has been positive. Clearly there’s a lot of interest in rock art generally and the Cochno Stone in particular. As projects go, to excavate and replicate the Stone is an exciting prospect but one that will take a lot of effort to achieve, requiring permissions, funding, willing participants and the technical wherewithal. Of course, should the project ever happen it would great to produce a more substantial film. Sitting here in my shed, however, the notion of producing a fully-fledged film about the Stone seems remote.

Recently I was mentioned in a piece by Pat Kane, writing in The National about Scottish film, or rather, the lack of indigenous production. A week later Creative Scotland announced a £1.75m Production Growth Fund aimed explicitly at high-end films and TV coming to Scotland, a strategy that on paper doesn’t exclude indigenous films but given the anticipated budget levels probably does. In the article Pat refers to my idea, that smaller awards of public funding, spread more widely, could address the lack of homegrown production. That, and the creation of a platform supporting all Scottish moving image regardless of how it originates, i.e. films made with no public funding and/or films that don’t necessarily fit the conventional models. Such a portal could show a wide range of moving image, from DIY music videos to artist’s films to animations to micro-budget features. My point being that as a brand Scottish Film would have a home and the makers could perhaps benefit if only by being acknowledged for their contribution to the culture.

Last year on a trip to Amsterdam I was stopped in my tracks by a 4-storey building – the Netherlands Film Institute – an entire building dedicated to Dutch filmmaking. Nowhere in Scotland is there an equivalent – not that I believe there ought to be – after all, the notion of the ‘institution’ is outmoded. Still, I can’t help but despair every time I walk past the Scottish Ballet HQ, a purpose-built base paid for through the public purse yet which has no visible public entrance. Similarly the other ‘arts’ – theatre, opera, classical and traditional music, the visual arts – all boast bespoke bricks and mortar. Out of all this cultural activity only film has no base in Scotland. Instead it exists in a scattered collection of rented offices, bedrooms, derelict warehouses and factories or redundant public places, e.g. The Govan Town Hall. Or in my case, a garden shed.

As much as I believe Scottish-based filmmakers, myself included, feel demoralised, we only have themselves to blame by not shouting louder or lobbying for better. But then, who’s listening? Like the Emperor’s New Clothes scenario, our cultural leaders delude themselves every time they walk up the red carpet to attend a premiere or make speeches from the Croisette about the vibrancy of Scottish screen culture. Recently Robin MacPherson, Professor of CI at the University of the Highlands and Islands, retweeted that the definition of a musician was ‘someone with £5000 of gear driving a £500 car who travels 100 miles to a £50 gig’. This, he added, was a fair summation of the creative economy. He’s not kidding. Filmmaking in Scotland is Mission Impossible where the only people making a living are those who don’t make films, merely enable those who make them, whatever that means.

So while I muse on the maybes and what-ifs of the Cochno Stone project and the prospects for a future film, I console myself knowing that many people enjoyed watching my video. But as the old saw goes – who do I have to sleep with to get off this picture?