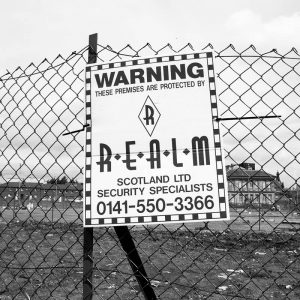 As someone who got early release from Edinburgh – *rubs wrists* – after four years – I knew immediately I was firmly back on terra cognita when I spotted a few familiar signs, typically screenprinted on corrugated plastic. These signs are a prominent fixture in any city, but in Edinburgh – at least in the genteel district I was privileged enough to live in – they were invisible. Stepping off the bus, train or car within a mile or two radius of Glasgow City Centre, the most casual observer can’t fail to notice the security sign. Or rather, the name and phone number – rarely a website address – of a host of companies announcing themselves as the guardians of vacant and occupied properties or shiny developments yet to be populated, a tough proposition in these doomiest of days. 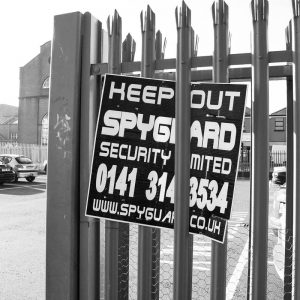 Even more strangely, in no other city – even New York – have I witnessed so much security lavished on patches of scrubby spare ground, land stood fallow for decades, the post-demolition pastures of old slums, new slums and industries heavy and light. As night falls, in city office blocks the sight of lone security guards posted behind desks is the norm. There they sit, lost souls outfitted in some pseudo military garb, glued to the sports section of the Evening Times, miniature TVs or banks of CCTV monitors. The smokers among them venture out to grab their fix before returning to sit out the night shift, usually on minimum wage – an hourly rate roughly the cost of a packet of twenty Mayfair. What exactly are they guarding, I wonder, that a decent alarm system and a lock can’t protect? 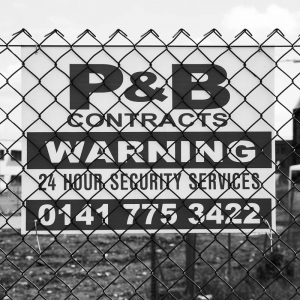 Even on building sites boasting expensive plant I’ve yet to observe an actual person at work. Sites such as the stretch of A77 at Eglinton Street, currently under construction for the M74 completion, may be fenced off but plant theft is hardly an opportunist crime. Even the worst gangster movie needs a call sheet. To pull off a major heist takes organisation and substantial manpower, so the notion of a lone guard thwarting a gang of hardened JCB boosters is moot. No fence will ever deter the determined. That’s assuming there’s a guard patrolling one in the first place. 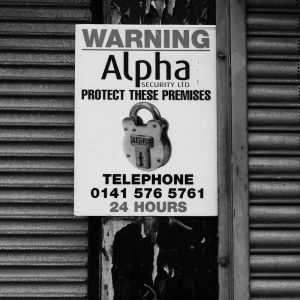 Elsewhere of course are the armies of door stewards. It’s becoming almost impossible to enter a city bar or club today without passing the scrutiny of a black-coated, professionally suspicious, doorman/woman. Meanwhile restaurants seem to cope without private policing, possibly because the incidence of mass riots is too low on the scale of civil unrest to matter. 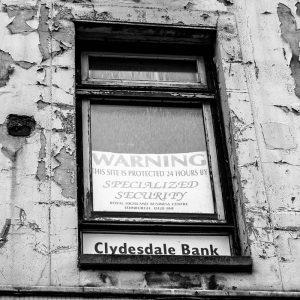 Following the demise of the in-store detective, virtually every city centre shop now boasts the visible security officer, outsourced from some occult agency, most of whose employees appear so demoralised the odds of them giving chase after light-fingered neds are negligible. In most cases the demeanour of the average security guard disavows the myth of the alert, athletic nemesis of all shoplifters. If there’s any chasing to be done, it’s best left to Strathclyde’s Finest, a common occurrence these days in the Argyle Street branch of Primark, much to the humiliation of unfortunate offenders. In Sauchiehall Street, once the city’s great shopping thoroughfare, security is no longer relevant now that the majority of retail outlets have been demoted to pound shops and charity stores. It’s the vacant units that are more likely to need protection. If I were hiring, I’d go to straight to the crooks, the guys with the inside track who – if you buy the line in the tabs – own the monopoly on the security game. 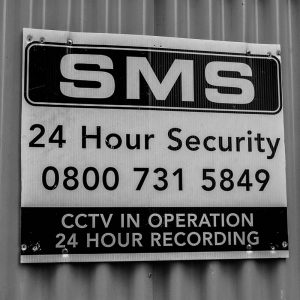 What perplexes me most in this surfeit of security is the all-seeing lens of CCTV. Glasgow ranks among one of the most-watched cities in the UK, with cameras posted on every street corner, at every traffic junction, in every form of public transport and in virtually every public venue. Pacified by statements – ‘public safety’, ‘road safety’, ‘crime prevention’, ‘national security’ – handed down by policymakers and politicians, we citizens accept the intrusion into our lives with little comment and less opposition. 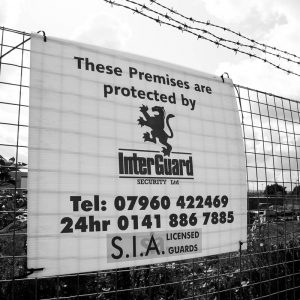 Even worse, with mobiles and internet access we’ve all become willing accomplices in personal disclosure. Social networking ensures we the people deposit plenty of clues as to our whereabouts, our identities and our deepest secrets. Judging by the leaks, the losses and the feckless actions of the privatised companies charged with keeping us – and our information – safe, our civic and state authorities fail in their duty. Forget ID cards. I may be watching too many conspiracy nut videos on YouTube these days but how long before RFID chips come into play, I wonder, injected into our very beings? Why not? The same technology is already being used in passports, so it’s only a matter of time and the right propaganda before we’re all queuing up to have one inserted. And what’s more, most of us will – strike that – are already paying for it.