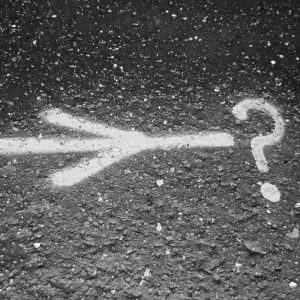 In my Quixotic pursuit of Harry Bell’s Glasgow’s Secret Geometry, I’m searching for the end of a line, in this case a line that leads from the Necropolis, through Ross Hall to Stanely (aka Stanlie) Castle. But according to the rules laid down by Alfred Watkins, he of The Old Straight Track, this line’s not even a true leyline, i.e. passing through at least four sites. In fact, I’m unsure of why I’m even making this trip, since Harry Bell’s account fails to mention Stanely Castle as a significant site in his network. So why am I here?

This corner of Paisley has already lost me twice: once on a sublime July evening, the second time only a week ago, a blurry rainswept late afternoon. Each time I got close to my goal – a semi-submerged pile in Stanely reservoir – it seemed there was no way of getting near. No public access road, no visible path, just tantalising glimpses of the castle from Gleniffer Braes. Getting lost is part of the journey, I tell myself. Who am I kidding? 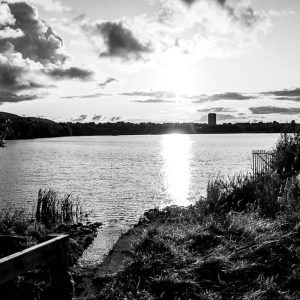 Time bends. The dates attached to these trips are true but the shift between the journey and my recollection of it seems to have slipped along the way, a journey made in September, recalled in October, written about in November and finally posted in December. Memory plays tricks, so my three journeys to Stanely Castle merge into one, the third and most recent taking place on an ordinary rainy (what else?) weekday, travelling along the Glasgow Road, getting lost again in Paisley’s traffic system (no sat nav, only OS maps). Resorting to my inner compass, I take a short cut through a small housing scheme until I emerge at roughly the right place.

What looks like a private turnoff on the Gleniffer Road leads me to a white-painted house on the edge of the reservoir. I park on a convenient inshot on the left-hand side. I’ve no idea if I’m trespassing so I make ready with excuses should the owners decide to welcome me with a sawn-off or a blunt reproach. Today the rain, as on so many days, reminds me of the German phrase – ‘it’s raining knives and forks’. It’s so wet and windy it’s almost comedic. Every time I open the car door to test the weather I’m forced to slam it shut. Any minute now I expect to see a visual effects crew emerging from the bushes waving pressure hoses, a wind machine on standby.

For a long time I shelter, questioning my sanity. A few days before, on an afternoon of similar dreichness, I walked the short distance from my house to Queen’s Park. My mission – to capture raindrops on the pond in a sequence of close-up, abstract shots. This, I tell myself, is a useful exercise: Glasgow, distilled into a single visual motif. Nothing says more about this city than its share of rainfall. The few passers-by – an Asian-Scots father and son and a besuited businessman filling a small container with samples from the pond – pay me no mind as I hunker over my tripod, juggling an umbrella as I focus, mesmerised by the perfectly-formed ripples radiating in my viewfinder. 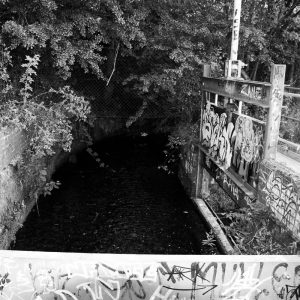 I sit, drinking coffee from my flask, half-listening to alien accents on Radio 4, a background murmur, waiting for a window. My view of Stanely Reservoir is blocked by shrubbery and tall perennials: dock, rosebay willow herb, the summer greenery turning to rust as autumn approaches. The windscreen mists over and my mind turns to Harry Bell’s network and Stanely Castle. Earlier reading revealed little. The castle isn’t listed as a notable historic site on the Renfrewshire Council community website, although it merits a mention under their listing for Robert Tannahill. I find the following on the Sunny Govan site –

Stanely Castle, to the west of Paisley, is still standing today, despite sitting in the middle of a reservoir. The exterior of this L-shaped keep is relatively intact – but the interior of the structure is now completely destroyed. It is situated on land that was originally the property of the Danzieltoun or Dennistoun family. In 1402, the lands passed through marriage to the Maxwells of Calderwood, who at the same time also took possession of Newark estate, at modern-day Port Glasgow on the Clyde estuary. The Maxwells undertook the construction of four-storey Stanely Castle and it remained in the family for the next two centuries until 1629, when it was sold to the Hawkhead family. 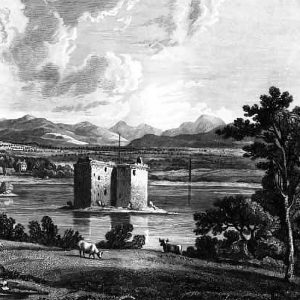 Hawkhead? No doubt related to Sir John Ross Hawkhead, the man known as ‘Palm My Arm’ who won lands in a wrestling match and whose remains lie in the Renfrew Old Parish Church. The suitably Gothic name, Hawkhead, struck fear into every kid in Pollok. It was the name of the Govan district asylum built in 1895 for the Govan District Lunacy Board and, as all mental institutions tend to do, it induced legends. And as every kid in Pollok was aware, the regular escapees took refuge in the water tower in Crookston Wood, emerging only to attack the unwary. The Govan District Lunacy Board is not to be confused with the Govan Poor House and its original hospital, the Southern General Hospital where, half a century ago, I was born on a freezing January morning.

Outside it’s still raining. Coffeed out, I toy with my stills camera, trying to fathom my compulsion to visit a place that’s taken me three attempts to find. I imagine Harry Bell felt similar misgivings when he chased the idea of Prehistoric Site Alignments. Even with his knowledge of map reading and field archaeology, Bell must have doubted his instincts at times, so it’s a testament to his commitment that he would still jump on his bicycle to venture to the most unpromising corners of Glasgow.

I realise I’m off the spine of this narrative. What became of Stanely Castle? Back to the Sunny Govan site –

It passed by marriage to the Boyle family in the middle of the 18th century. David Boyle had been made the first Earl of Glasgow in 1703 and the family’s main estate was centred around Kelburn Castle at Largs. The Boyles built many churches all over Scotland, including the Cathedral of the Isles – Britain’s smallest cathedral – on Cumbrae. By the 19th century the family found themselves in serious debt and Stanely Castle was abandoned and fell into ruin. In 1837 the marshland surrounding the castle was flooded to create the Stanely Reservoir, which supplied the people of Paisley and its surrounding areas with fresh water. Over the years, the reservoir level was raised. It now submerges the lower portion of the castle, which had until then remained above the waterline on higher ground.

Here you have the seeds of drama, a story driven by money – or lack of – themes thoroughly modern in times of banking failures and capitalist misadventure. In this particular plot – property-owning dynasties, deals made through marriage, debt and disaster – all that’s left is a pile of stones standing in a reservoir, barely remarked on by those passing by. Stanely Reservoir is surrounded by houses on all sides. How many of these will be repossessed in the coming year, I wonder? How many jobs will be lost, bankruptcies declared, marriages broken? Just how bad is it going to get? The walls of Stanely Castle are silent on the matter. 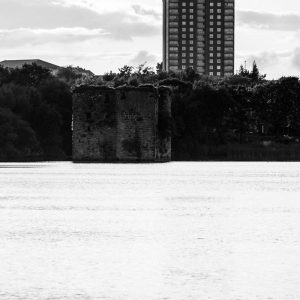 I have a choice – do I abandon my trip or do I attempt to shoot? Opting for the latter, I struggle up a grassy bank with my tripod, camera and umbrella. It’s treacherous underfoot, my visibility reduced to a hundred metres or so. So far on this journey I’ve always waited for fair weather but now realise the futility of waiting for the right moment, the perfect conditions. Setting up on the bank in driving horizontal rain, I look over the water to the castle remains; it’s as if a vast sheet of grey gauze has been dropped from the sky. I try to visualise the castle in its original state, all four storeys visible. If this rain keeps up, I tell myself, soon all I’ll see is a short stump of wall poking up from the reservoir – and I’ll be drowned. 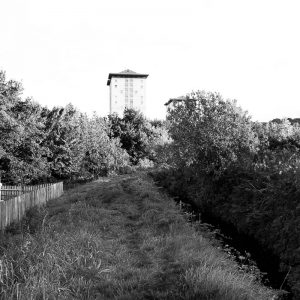 Beyond the castle looms a Gleniffer Braes tower block, the Braes being a favoured spot during the 1970s and 80s craze for Citizen’s Band radio. In the early 90s I recall meeting the operators of a pirate radio station whose illegal transmission from the same tower blocks attracted a sizeable audience and the attention of government authorities who wasted no time in prosecuting these ill-doers. In violent raids doors were rammed, equipment seized, fines issued and otherwise law-abiding citizens made into criminals. These days the same authorities licence the air to revenue-maximising local councils who in turn erect mobile phone masts on the tops of tower blocks, despite widespread concern as to possible threats to health.

Turning from the camera I find an inch of rain pooled in the tripod case. Time to pack up. I’ve no idea how long I’ve stood here but even under an outsized umbrella I’m soaked to the skin, feet squelching as I trudge my way back down the bank. Suddenly I feel exposed, a charlatan, knowing I have none of Harry Bell’s skills, just an intuition, a sense of connection to the places he’s led me to, seduced by the idea of a quest, but lacking the interpretative means to prove anything more than the fact I’m following in his footsteps. At least I have my shots, so hopefully that will be enough.