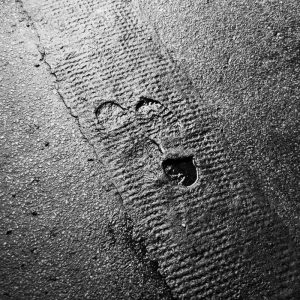 Unlike other diehard urbexers in this burg – risking life, limb and liberty in pursuit of derelict buildings, tunnels and mysterious corners – I stick to the highway. Which on the main artery to southside Glasgow gets all the harder. Hour by hour, shift by shift, the most visible new track in the city, the M74 Extension, ploughs over Eglinton Street, the old A77 – through entire communities whose names – Polmadie, Oatlands, Dalmarnock – may be lost forever in the span of a generation. So obtrusive is this road, such is the alienation it promotes, the government might as well put up a Border Control and reinstate the old Gorbals Leprosy Hospital while they’re at it.

In an earlier blog, I referred to this controversial motorway extension and how, according to a Wikipedia entry there’s no primary destination. 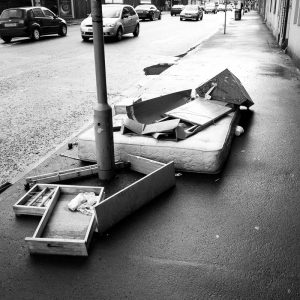 Straight as a gunshot I head north up the A77 to assess the damage. To call Pollokshaws Road an exercise in incoherent urban planning would be an understatement. Here the old co-exists with the new – a mix of bookies, old lag bars and one-man outfits: barbers, fast food joints, Asian Wedding organisers, charity shops, computer stores.

The new enterprises – upmarket cafes, catering for those who stare into laptops on 2 pound-a-hit lattes – are on the up, due to the advantageous property prices compared to the favoured West End and the covetable period properties south of the river. Yet alongside the old red and blonde sandstone tenements, the new fast-track apartment developments, shoddily-clad, bonkers plumbing on show, already display signs of neglect, if not dereliction. Casual renters don’t wash their windows but given the less-than-spectacular view, who can blame them? 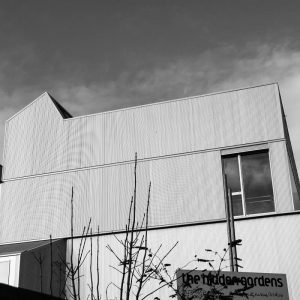 At the corner of Albert Drive I note the new Scottish Ballet HQ, a bold addition to the streetscape, but its entrance sequestered, hidden, like the gardens sharing the same turf. Like we’re not meant to see what our money is being spent on. How long, I wonder, before Culture and Sport Glasgow shut The Tramway, today an unofficial and highly subsidised creche, which surely attracted more local traffic when it was the Transport Museum. Passing St. Ninian’s, a block or so down, past Utopia, I meet a man smoking outside the Maxwell Arms. Unprompted, he points to the still-vacant Plaza development, built on the site of the former dancehall. Look at that, it’s an absolute disgrace of a building. I can’t disagree. I ask his opinion of the new motorway. He bristles. Glasgow, he pronounces, is the only European city with a motorway running through the middle of it. 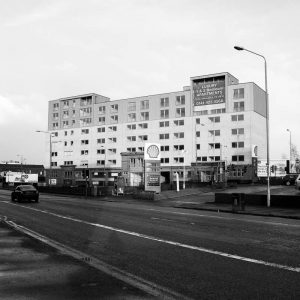 Past the Halal chippy at St Andrew’s Cross, (Eggy Toll) traffic is reduced to a single lane while overhead massive pre-fab slices of metal and concrete are inched into position and conjoined. The scale of the task is awe-inspiring, as are the logistics. The existing roads – potholed to blazes – are traffic-managed, rerouted, bus stops decommissioned, local businesses paid lip service to, the local population ignored. Cyclists are suicidal daredevils on the A77. What would Robert Burns have made of it all as he took this same route from Glasgow to Ayrshire, when, as legend goes, he got his ass kicked by a publisher? Where today on that lonely road once a good handful of public houses stood would Burns drown his sorrows, unless he picked up a carry-out from Lidl on Jamaica Street before crossing the Clyde. 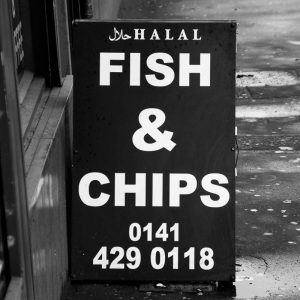 The Kiloran Bar at the corner of Cumberland and Eglinton Streets has given up the ghost. Some would argue the stretch between Carlton Place and St Andrew’s Cross has been derelict for so long that any new construction is better than none. The recent fire at the old Coliseum – of which Glasgow seems to have had more than its share – is just another reminder of how disposable the city’s landmarks are. Demolished in haste, today the site is fenced off, the obligatory security firm signs attached, as if to deter nefarious property developers arriving in the night to erect a new block of flats or a supermarket. 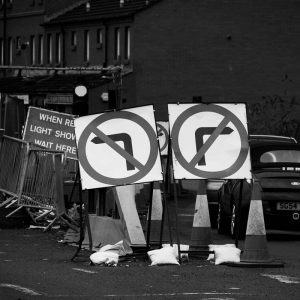 What’s disconcerting here is the lack of dissent over the planning of the monster highway. Unlike the protesters of the Pollok Free State over the building of the M77, the new M74, despite the lengthy delay in the inquiry over its construction and the conclusion not to build it, was simply allowed to happen, just as the demolition of Alexander Thomson’s splendid row of social housing on Eglinton Street was waved through. 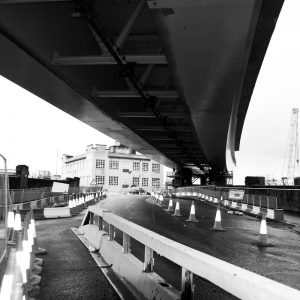 I pause at Kilbirnie Street, where at time of writing one of two carriageways has already crossed the A77. Opposite, on Devon Street, beneath the giant flyover, a low-rise terrace of red brick houses, built relatively recently, seems dwarfed and cowering even on this shadowless day. What of the residents, or of the few local businesses? Sadly June Brides looks like a hopeless case now, in spite of the contractors’ efforts to provide alternative parking off the one-lane highway. 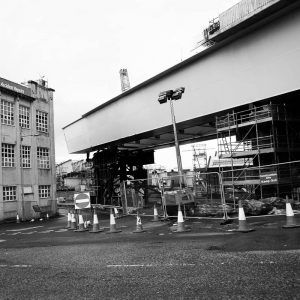 None of this is surprising in Glasgow, a city historically undesigned for and devoid of a middle-class, particularly within its inner circle. Voiceless and without influence, its working class base, casualties of a Conservative government, later betrayed by New Labour appear neutered, no longer prepared to re-enact the 1919 Battle of George Square, the UCS lockouts or the Poll Tax riots. With no riled bourgeoisie to fall back on, the game in this city is a bogey. 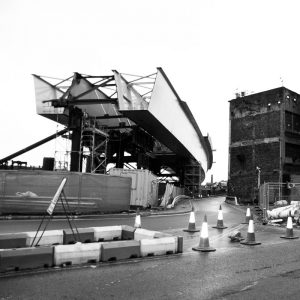 In this climate, it’s easy to get rid of the non home-owning population. What the contractors of the M74 Extension may or may not know is how the blowdown of the Stirlingfauld Flats last June provides the asbestos-riddled aggregate for the build. Trucked in, shovelled up and shaped into hill-range mounds beside Scotland and West Streets. Here street-upon-street, once densely populated, was evacuated in haste to make way for the M8 and the Kingston Bridge. 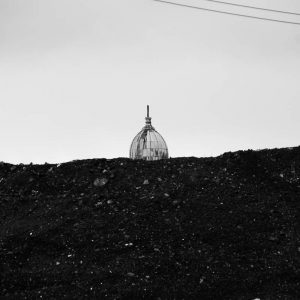 Then as now people moved involuntarily, transported – the term overspill was coined – to outlying schemes and new towns in what can only be described as soft ethnic cleansing. It took a generation or so to halve the city’s population of roughly a million, a move in sync with dismantling industries – the type of manufacturing and engineering that today keeps Germany at the top of the league of exporting nations. The footprint of the old streets persists, populated now by light industry and warehousing and the odd Victorian relic, whose occasional well-turned piece of masonry of an old factory is left to rot, perhaps destined to be burned down, seemingly at the council’s convenience. On Scotland Street, the Mackintosh School is a jewel that but for a stroke of an eejit’s biro might have been lost for good.

Recently I’ve had a few enquiries about specific Glasgow buildings and whether I have a photograph. Inspired, I return to one of my favourite books, Frank Worsdall’s The City That Disappeared, a title never more apt – or tragic – for any account of a city’s lost architecture. On re-reading his introduction I’m struck by Worsdall’s tone, clearly a man propelled by righteous anger. Where much of the southside of the city is concerned, I can’t help but think he’s entirely justified.