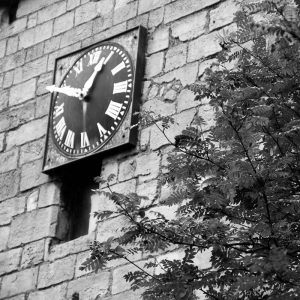 I’m in King Street framing up the clock tower at the back of Rutherglen Old Parish Church when Tommy sidles up, an Olympus compact in his hand, eyeing up my tripod and camera. You’re a photographer? It’s 7 o’clock on a Friday night and I’m here because the Glasgow weather doesn’t stick to timetables. Not really, I reply as I take the shot. Tommy, short, wiry, probably in his late 50s, shifts from foot to foot, eager for more information than I’m prepared to give him.

In this narrow street it’s hard to catch the last of this rare light. I’m on a mission to locate three of Harry Bell’s sites – the aforementioned church, the Gallowflats Mound and Carmyle Fords. But only if I’m quick. However Tommy seems like a man with all the time in the world, shuffling behind me as I chase another angle a few yards away. I still prefer to use real film, he tells me, not the digital stuff. Normally I’m a paragon of patience when it comes to curious bystanders, but I fear Tommy’s pushing his luck. 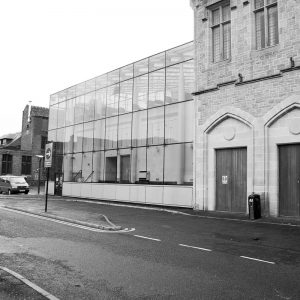 Distracted by my stalker, my eye drifts to the incongruous glass box attached to the back of the Burgh, or Town Hall and what looks like a full-on wedding party. I make small talk, hoping maybe Tommy can fill the gaps in my Rutherglen knowledge. I’m not from here originally, he tells me, I was born in Tollcross and I still work in the park there, growing roses. The photography’s just a hobby. Eventually he gets bored and walks off, leaving me to pursue my hobby. I cut down a lane into Main Street to glimpse the front elevation of the church and the curious sundial posted above the entrance. 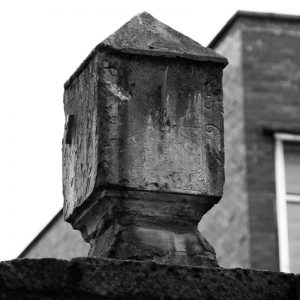 If ever a site exemplified Harry Bell’s notion of ancient places being built on and rebuilt on, it’s the Old Parish Church. Their informative website informs me that a church has stood on this ground for 1400 years and that the original building was founded in the 6th century by St. Conval, a disciple of St. Kentigern, or Mungo, the Patron Saint of Glasgow. The site also references David Ure’s History of East Kilbride and Rutherglen, published in 1793, which prompts questions. What, if any records will survive about the buildings being erected in Glasgow today? With so much information available now, which if any sources will be deemed verifiable? Under the weight of all this putative knowledge – I mean, history can only ever get longer – I guess it’s meat and drink for future PhD students. How narrow can their specialisms get? 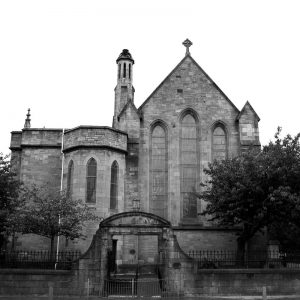 I cross the street and stand my camera outside the Royale Club, a den if ever there was one, pointing back to the church and its adjoining cemetery. A late middle-aged couple approach and ask if I know of any decent bars. I don’t, but maybe I should. It’s Friday night, after all. Part of me would rather shoot what happening on the street – the locals, the cars they drive, the billboards, the street signs – than photograph the fourth incarnation of the church, built in 1902 by the Glaswegian architect, J.J. Burnett after the third church was demolished in 1900. And the one after that… 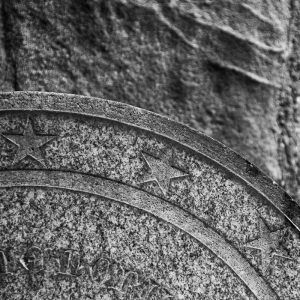 I get my shots and with the light rapidly fading I speed down the road to the Gallowflats Mound. According to the Glasgow Network of Aligned Sites –

…the PSAs run straight as a rifle shot through the oldest man-made structures in Glasgow, Bothwell, Carmunock, Crookston, Castlemilk, Dumbarton, Drumchapel, Easterhouse, East Kilbride, Govan, Hamilton, Inchinnan, Kilsyth, Old Kilpatrick, Paisley, Renfrew and Rutherglen. No matter whether it is a castle, church, burial site or habitation, the oldest known site in each of these 17 communities has an alignment passing through it. No amount of ‘observer bias’ could conjure up this result artificially.

This is clear statistical proof that the present layout of Glasgow evolved from a long-forgotten framework of Prehistoric Site Alignments which are accurately sighted onto the surrounding hills.

Really? A site in Drumchapel, Pollok’s northern cousin? Not according to the plot points I’m working to, but maybe I’m wrong. My pitch for this project was to discover the magic in ordinary places. They don’t come more ordinary than the unprepossessing housing scheme surrounding the Gallowflats Mound and the gapsite bordering it. The New Statistical Account of Scotland – By Society for the Benefit of the Sons and Daughters of the Clergy, published by W. Blackwood and Sons in 1845, describes how the mound was originally surrounded by a ditch and how in the mid 1770s, the owner, Mr Patrick Robertson created a fishpond in it. During the build, a six foot wide paved path was discovered leading to the top of the mound along with two brass or copper porringer shaped vessels with broad handles and the inscribed word – Congallus, Congallus being an ancient Scottish king (479 – 501). 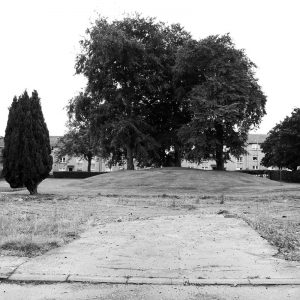 Clambering up the concrete rubble of a gap site to get my shots, it’s hard to believe that this was once such a sacred place, probably predating Christianity. And that’s what makes it magic. For me, at any rate. If it wasn’t for my Quixotic task to follow in Harry Bell’s tracks I would probably have never seen this place, so I thank him for that much.

My next stop is Carmyle Fords. Or it would have been but for the impinging dark, the fabulously verdant riverbank and the Clyde, swollen-to-bursting with the summer’s queer rain. I find my way to the River Road on the north bank – less a road than a narrow track. No way will I get anything useful here tonight.

Walking along, I feel my Glaswegian hackles rise because it’s undoubtedly a mugger, rapist, murderer paradise. Indeed a murder took place in these parts only days ago, according to a report in the Rutherglen Reformer, when 32-year-old Charles Bowman was killed during a pitched battle between two blade-wielding gangs, one of the weapons said to be a samurai sword. There’s simply no way of rationalising the impulse to kill. It’s too complex to fathom, suffice to say the social and cultural climate we live in abets it. Simplistic I know, but when our governments wage wars, when otherwise principled politicians promote arms dealing to shore up UK PLC, it’s hypocrisy to cry foul when young dispossessed males take up arms.

Meanwhile, I suffer the curse of urban explorers everywhere – I need to pee, a need never alluded to by the likes of Iain Sinclair or the Situationists. Too middle class to admit it, I suppose. I’ve been out for hours and that flask of tea needs an urgent exit strategy. Squatting behind a bush I start when loud voices reverberate, too close for comfort but not near enough for me to stage a counter-attack. I press my panic button for a nanosecond before realising all I’m hearing is the sound of the old boys at the local Carmyle bowling club. It’s Friday night, after all. Some of us are enjoying ourselves, I’m relieved to say. In more ways than one…