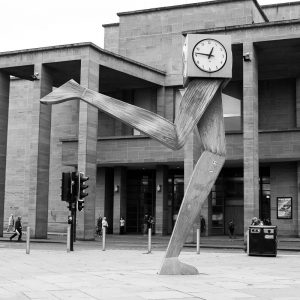 From St Andrew’s Bus Station, Edinburgh, I catch the 900 bus to Glasgow. The day is overcast but warm and the bus is busy with students and pensioners taking advantage of the cheap ride to the city. Long before we reach the M8, I notice a man sitting adjacent – probably in his 30s, nondescript scruffy, looking slightly troubled, but bearing no clue to his status. Reaching into his rucksack he pulls out a packet of custard creams. I avert my eyes while, one by one, he scarfs the entire packet. Is he hungry, I wonder? A sugar craving? The current wisdom on diet and health would fail to condone the guy. Five minutes later, I catch the man biting through the wrapper of a second packet of biscuits, only this time it’s Bourbons. Again he devours the lot. We’ve yet to reach the M8.

The bus arrives at Buchanan Street Bus Station on time. The weather’s no different here but I’m struck at how the people walk with a greater urgency than their East Coast neighbours. I’ve arrived at the city of my birth, only now I realise I have no idea where I’m heading so I buy a coffee at the AMPM stall. Behind the counter – a girl – blonde, petite, fake-nailed, is having bother finding the edge of an industrial-sized roll of clingfilm. What’re you havin’? she snaps, not bothering to look at me. I order a coffee. What was that? She snaps again. Welcome to Glasgow.

Taking my coffee outside I sit on a low, overspecced bench built of curved steel tube not unlike scaffolding poles, clearly designed to deter loiterers. Further up I notice a man not sitting but squatting. Clearly he knows the score. The first thing I notice is his faded red and white striped sweatshirt and the well-used Lidl shopper. He’s restless, alert, scanning the street and the other people sitting nearby. I dip into my bag and pull out my camera, snapping the clock on legs, a worthy piece of street furniture fashioned from stainless steel, running in the opposite direction from the bus station. It occurs to me that the clock only gives the illusion of motion, hard-wired to the concrete.

As I fathom the meaning of the clock, the squatter clocks my camera. He speaks to me in a rusted gutteral, so I shove up, juggling camera, coffee and bag for a closer listen. The man – Chris, as I find out later – slugs a bottle of Lucozade. He’s quick to tell me his story. An ex-serviceman in the Scots Guards, he recounts how he saw action in both the Falklands and in the first Gulf War, for which he was decorated.

Chris rolls up his sleeve to display a set of long pale scars running from wrist-to -elbow, elbow-to-armpit on his left arm. He’s so engrossed in his war wounds I look at his face. I have no idea how old this man is – anything from mid 30s to mid 50s, he’s entered that place where age becomes irrelevant, that it’s not time that has ravaged him, but a life of unmitigated hardship and sorrow. For the last six months he’s been homeless but his ex-sergeant, so he tells me, lives in the West End and allows him to take a bath once a week. Trouble is, he says, the sergeant’s got a wife and two boys – the boys are up though but all the same – it’s still a bit awkward, y’know?

Thing is, he says, here’s me homeless, yet these asylum seekers can walk into a fully-furnished house. Chris has more of a legitimate claim on grievance than the hostile bigots clogging the comment sections and letter pages of our newspapers. Where is he living now? I ask, a hostel? No, he snaps, can’t stand them – or the junkies in them. Me, I’d rather the streets. There’s no sensible reply to this. Anything I say now may come over glib, if not downright patronising, so I decide it’s better to listen, not speak. He’s about to continue when a plump woman interrupts, handing him two loose cigarettes. I note that she’s with a man who gave my companion a cigarette earlier, typical of the generosity here.

Another woman sidles up, a familiar type on the streets these days; long skirt, headscarved, olive-skinned, possibly East European. It’s hard to tell, easy to make assumptions. She offers a dog-earred card that I don’t bother to look at. I don’t feel guilty about this because I simply can’t give away money to all comers since I have no money. The only thing I have to share is my debt and she wouldn’t thank me for that. We’re all two paychecks away from the gutter, a friend once told me. I don’t even have a paycheck, at least not a regular wage. Neither does Chris. The woman scuttles off, empty-handed.

Having squirreled the fags, Chris tells me – as neutrally as any desperate man can – how all he wants these days is to get drunk. Naw, he then adds thoughtfully, I’d rather be dead. He tells me about his baby, a cot death and how he woke one morning to find his wife dead of an overdose. How much tragedy can one life contain? More, it seems. Chris’s brother was found dead too, a needle in his arm. I feel the full stop.

As I make to leave, I offer Chris a couple of pound coins and he takes the money, insisting that he didn’t ask for it. I know, I reply, knowing I don’t. Not really. 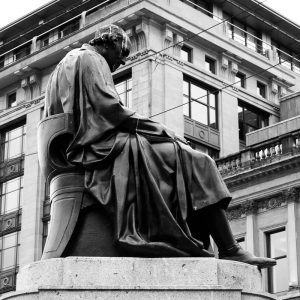 Minutes later I’m in George Square. A massive billboard shrouds a building on the south-eastern corner – another delayed development. It reads – ‘Home is the most important place in the world’ – an IKEA advert. It occurs to me that I don’t know the identities of the statues occupying the plinths – Robert Peel, Queen Victoria astride a horse, Albert, James Watt, Robert Burns, Lieutenant General Sir John Moore… or their makers, apart from John Mossman. I snap at them with no enthusiasm. The day is damp, the light nonexistent, the sky a grey quilt. 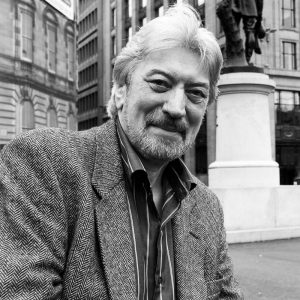 I’m soon approached by a man; tall, rangy, bearded. Andy wears a grey tweed jacket and dark slacks, shiny slip-on shoes. His eyes are rheumy. He has the bearing of a beleaguered secondary school teacher, say, or a dead-wood administrator for the city council. He takes me for a tourist, but I soon deprive him of that assumption. Come and I’ll show you something, he enthuses, I didn’t know this was here, it was the wife who pointed it out to me.

He leads me a few yards for a clearer view of the façade of the City Chambers where at the pediment close to the top of the building I spot a facsimile of the Statue of Liberty. I had no idea it was there either. We look at it together, tiny Liberty. I was due to meet my wife for lunch, he says, but I guess she’s out with the girls. I begin to wonder if Andy has a wife, since he seems more interested in talking to me. Plus, there’s no sign of him in possession of that modern ball and chain, the mobile phone.

Andy clearly prides himself on his local knowledge and spends a lot of time in Border’s bookstore reading up on the subject. He tells me in his younger days he became a blacksmith’s apprentice and moved into engineering for a family firm called Watson, from where he claims he was ousted by Watson’s two sons. Blood thicker than water, he opines. These days, he works as a freelance consultant on engineering projects and mentions something about the recent renovation of the Botanic Gardens and how he helped to reinstall the main entrance gates.

We take a bench. As I light a cigarette, Andy informs me he doesn’t smoke but he’s in the habit of carrying a lighter, ‘in case a big blonde asks me for a light’. We shoot the breeze – the new riverside developments, the city’s bid for the 2014 Commonwealth Games and how the city leaders are keen to rid the centre of people like Chris. The same headscarved woman I’d seen earlier shuffles towards us, card held out in entreaty. Andy dips into a pocket and produces a card of his own. He shows it and she makes a face before leaving. Intrigued, I ask to see it. It’s in red Japanese script. What does it say? I ask. It says I don’t get bothered by the likes of her, he replies. It’s obvious he’s pleased with this one. Pocketing the card, he takes out a small notebook and leafs through it to reveal slips of paper and a couple of snapshots.

Who said this? Andy reads aloud from a handwritten note, a passage including the phrase, ‘Mitigated by tears’. Not twentieth century, I venture, maybe eighteenth? Correct, he tells me. He’s enjoying himself, he, keeper of the knowledge. The guessing game goes on until he finally reveals it’s a eulogy written by Robert Burns. I point out the Burns statue behind us. Yes, I recognise it, he says. I want to tell him how Burns had no particular connection to Glasgow, apart from trying – and failing – to ply his wares to various publishers, but I don’t.

Then out of nowhere comes a confession. ‘I didn’t go home last night’. Where did he go? The casino, he says, nodding vaguely in a south-east direction, insisting, not that I gamble – afterwards I went to Lauder’s Bar with this guy, ex-serviceman, served in the Falklands. I had a pint of soda and lime. The guy had a bottle of red wine. I pause for thought, uncertain whether Andy has just hijacked my story about Chris to furnish his own sorry confession. Replacing the eulogy, he leafs through the notebook like he’s looking for some kind of proof of identity. I get the feeling the book contains a list of Andy’s losses. I ask if I can take his photograph. I don’t like having my picture taken, he says, but he doesn’t take much persuasion. My guess is he’d be disappointed if I didn’t. But look at the state of me, he protests, half-joking, as he takes out a comb and runs it through his grey hair. I wonder about but don’t ask what his wife makes of his all-nighters. He poses with an uncanny ease as I take the picture.

D’you fancy a drink? It’s half one in the afternoon. I’ll just have a soda and lime, you can have a G n’ T, he says. While there’s something disquieting, mildly threatening even, about his assertiveness, Andy seems to be unravelling before my eyes. There’s a chink in his armour, a crack in the facade that belies the faintest desperation. He shows me a snapshot – two men and an older woman in hornrims, presumably his mother. Recognise anybody? I point to the Bee Gee lookalike on the right of frame. Correct, he says. He shows another picture, this time of a couple on a Spanish holiday, taken maybe sometime in the 80s. I put the woman in her late 20s, cheery, carefree. He looks pie-eyed. Me and the wife, he says, Benidorm. He replaces the photos. We had a bit too much that night. He looks like he’s had a bit too much today, but what, I wouldn’t hazard a guess.